My ADS-B setup was working very well for about a year, until it just stopped picking up aircraft signals. The setup was a JetVision A3 antenna mounted quite high on the side of my house with a good line of sight, 15 m coax cable and the FA Pro Stick Plus. Since this happened, I’ve tried lots of different things to try and fix the problem, but none have worked.

At first, I suspected water damage to the coax cable. However, even after it replaced, the problem remained. The old cable showed no signs of damage. I have since added in a FA dark blue external filter to my set up, but this has also made no difference. I normally use rtl1090 but I have tried other software. I’ve also tried another computer. Neither have made any difference.

After trying all this, I wasn’t sure what else I could do and left it for about a year. Recently, I’ve come back to see if I can figure out what’s going on. I’ve done some experimenting to ensure there is actually a connection with the antenna. I removed the dark blue filter and FA Pro Stick Plus from my set up and replaced it with a standard NooElec RTL-SDR dongle. I was able to receive radio signals just fine with the same antenna and coax so there is definitely a physical connection present.

Previously, I had no issues receiving data from aircraft 250+ km away. Every now and then I’d pick up aircraft as far as 400 km away. Now, the best I get is a couple of packets of data received in rtl1090 by very close aircraft, but nothing much at all. Even aircraft that fly directly overhead are usually not picked up.

The strange thing is that during that year I left it all, I would still come back every now and then and see if it worked. The majority of the time, it didn’t, but sometimes, seemingly at random, it worked pretty much perfectly. I cannot see any pattern that matches all of the times it worked. I live in a rural area, but this is making me think it’s some kind of interference issue, but I’m not really sure what could be causing it. I have run multiple scans which I’ve attached here:

I cannot figure out what is going on with my situation, so any help would be greatly appreciated.

You may need to add a Filter between Antenna and the ProStick, even though ProStick Plus has a builtin filter.

Most likely some powerful Cell phone or other communication transmitter was installed in your area which is causing this problem. It is not shown in your scan because its frequency may be outside the range of scan you have done.

Better try this scan. It covers full frequency range of Dongle, and is pretty fast.

The results of scans are below:

The scan 1 shows RF noise picked by antenna and processed without any filter , The scans 2 & 3 were done with filters, and show how filters remove this noise. 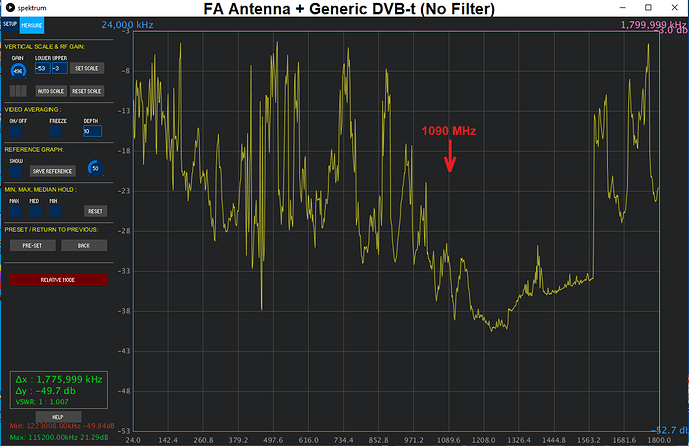 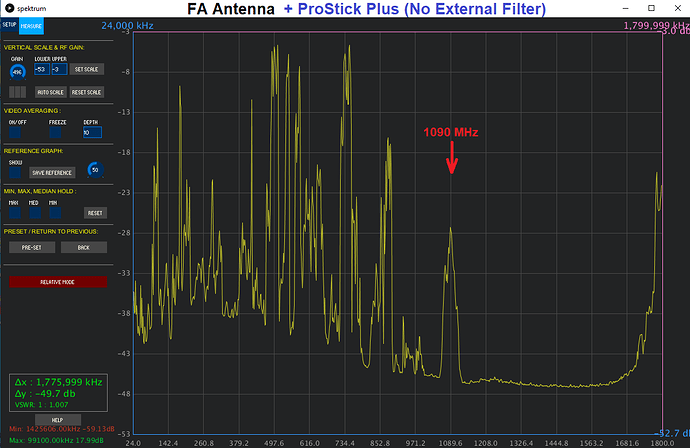 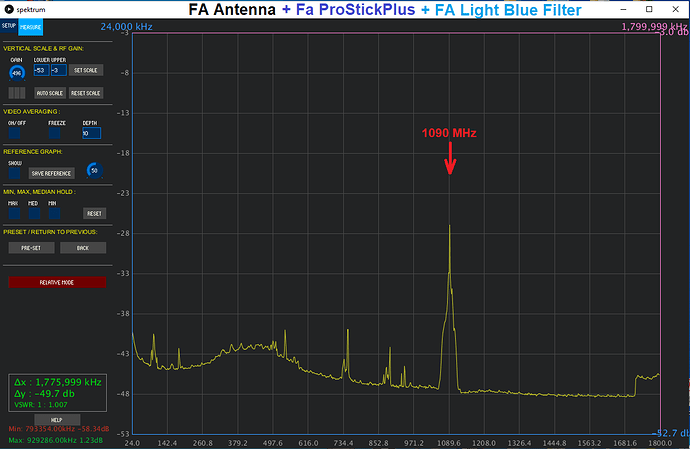 Thanks for the reply! I actually did one of those scans earlier. I couldn’t attach it above as it only allowed me one photo. This was the result with the ProStick Plus + external FA filter: 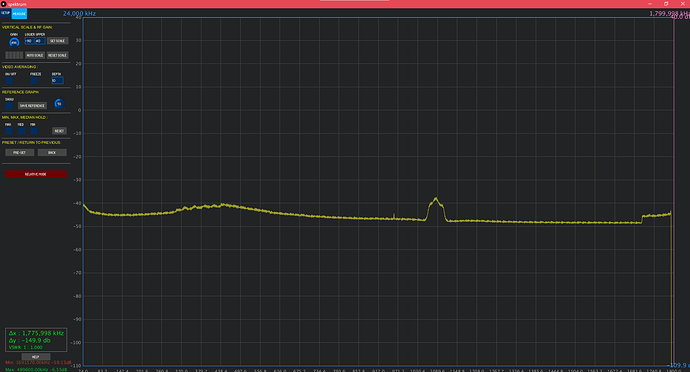 I removed the dark blue filter and FA Pro Stick Plus from my set up and replaced it with a standard NooElec RTL-SDR dongle. I was able to receive radio signals just fine with the same antenna and coax so there is definitely a physical connection present.

So that would imply the FA stick is faulty, wouldn’t it?

So that would imply the FA stick is faulty, wouldn’t it?

That was my conclusion also.

They replaced the Pro Stick Plus and filter and the problem resolved.

I removed the dark blue filter and FA Pro Stick Plus from my set up and replaced it with a standard NooElec RTL-SDR dongle. I was able to receive radio signals just fine with the same antenna and coax

Oops, I have missed this!
Good catch @wiedehopf and @SweetPea11

Thank you so much for all the replies.

I don’t think I mentioned this originally, but I have tried two USB sticks, the FA ProStick Plus and a the NooElec USB dongle. When I mentioned radio signals above, I probably should’ve clarified I meant FM radio stations around 100 MHz. Both USBs work fine for this, although the NooElec one is much better. I assume this is because of the onboard filter in the FA ProStick+ blocking out signals around 100 MHz. This makes me think that the USBs are fine. However, when I switch to 1090 MHz neither USB picks up aircraft. Could this be some kind of interference that only really affects signals at the higher 1090 frequency? Thanks again.

As both dongles (FA & NooElec) failed to receive 1090 Mhz, and as your wide band (24 mhz to 1800 mhz) scan by Spektrum shows that interference was removed completely by filter, the most likely reason is that your JetVison antenna has gone bad, may be due to ingress of moiusture.

If you can make a temporary 1/4 wavelength DIY antenna, diconnect coax from JetVision antenna and conectc coax to this temporary DIY antenna, it will make things clear.

You can initially try this DIY antenna indoors near a window before mounting it besides the JetVision antenna and diverting coax from JetVision to DIY.

(1) QUICK SPIDER - No Soldering, No Connector

I managed to find the first antenna I ever used for all this stuff. It’s just a little indoor one, but it was able to pick up some aircraft with the same USBs, so it’s looking like you’re right. I’m in quite a wet climate so water damage would make sense. I was just hoping it was something a bit easier to fix! The antenna is quite high up and tricky to get to so I’m going to need some time to get it down and test it. I’ll probably end up buying a new antenna and just keeping it indoors, up in the attic or something. I’ll update here when I make some progress in case it’s ever useful for others with similar issues. Thank you for the advice

The antenna is quite high up and tricky to get to so I’m going to need some time to get it down and test it. I’ll probably end up buying a new antenna and just keeping it indoors, up in the attic or something.

As an interim solution till you are able to get down your JetVision antenna, you may make a DIY quick Spider (or Cantenna) and install it indoors in the attic. It will perform much better than your first little indoor one, and you may get good results, say up to about 70% of the range/plane count compared to a healthy JetVision installed at same location.