A former Microsoft executive and his son were aboard a turboprop airline that crashed Friday morning into two houses in East Haven, Connecticut, a family member told CNN.
There has been “no official confirmation or positive identification” that Bill Henningsgaard and his son were on board, but there is no reason to believe that it was not the two of them, his brother, Blair Henningsgaard, said.
Also feared dead in the crash were two children – ages 1 and 13 – in one house, East Haven Mayor Joseph Maturo Jr. said. The other house was unoccupied.
Two bodies seen inside the home but haven’t been recovered because the home is unstable, East Haven Fire Chief Douglas Jackson said at a press conference Friday afternoon.
Fire that consumed both houses prevented them from searching for victims, Jackson said, and the basement in the home holding at least two victims was filled with water.
Maturo said the children were in one house with their mother when the plane struck shortly before 11:30 a.m. The mother escaped, he said.
“It’s … total devastation in the back of the home,” Maturo said.
The multi-engine Rockwell International Turbo Commander 690B, registered to Bill Henningsgaard, took off from New Jersey’s Teterboro Airport on Friday morning and crashed while approaching the Tweed New Haven Airport around 11:25 a.m., the Federal Aviation Administration said.
The plane missed its initial approach, which isn’t uncommon, said Tweed airport manager Lori Hoffman-Soares.
The neighborhood is about a half mile from the airport. One resident said the accident wasn’t surprising.
“They fly in very low, and a lot of times you can hear the engine cut of before it gets to the runway,” she told CNN affiliate WTIC.
The mayor said the airport’s close proximity to residents isn’t unusual.
“It’s always a concern, but it’s something that happens in every airport,” Maturo said.
Neither the pilot’s identity nor information about how many people were in the plane was immediately available.
The fuselage entered one of the homes, Malloy said. Video from WTNH showed smoke rising from a heavily damaged house in East Haven, and what appeared to be the tail of a plane nearby.
The right wing of the airplane could be seen in the smoldering wreckage of one house, and the left wing was in another house. Video from affiliate WTNH showed smoke rising from a heavily damaged house in East Haven, and what appeared to be the tail of a plane nearby.
Investigators from the National Transportation Safety Board arrived Friday, and they will take over the investigation, according to authorities.
NTSB investigators will examine whether the weather played a role in the crash. It was raining at the time of the crash.
Connecticut Gov. Dannel Malloy said there could be as many as five people killed in the crash, including up to three people on the plane.
But Blair Henningsgaard said only his brother and his nephew were believed to be on the plane.
Bill Henningsgaard worked for Microsoft for 14 years, beginning in 1988. He served as vice president of sales for the western United States, Australia and New Zealand. 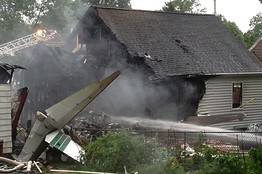