Its been a long time since I posted any question?..Todays question is about Drones or modified Drone planes!?..

Like Flight aware or Flight radar24 that tracks most planes and other aircraft’s, are there any Drone monitoring or drone identifying sites, or tracking sites to identify or find out more about Drones?.. I am not talking about recreational neighbours drones, but these are professional Drones mostly run by state, surveillance gangs etc, military drones flying over residential areas??.

any site or any company that tracks or can identify drones?..

Thank you all for your time and answers in advance…!.

Drones are captured as well as long as they are equipped with a transponder.
There are a few premium devices having this, but most of them do not.

I am not aware of any sites doing something different.
Maybe FLARM can be used, but i don’t have knowledge about it.

I am not talking about recreational neighbours drones, but these are professional Drones mostly run by state, surveillance gangs etc, military drones flying over residential areas??.

You want to track military drones? As in UAV?
They will turn on the transponders only if they want to show their presence.
And flying at 12-15 km altitude is not really pinpointing “over residential areas”.

Since this is a worldwide audience and you don’t say what country, just know that can be a sensitive subject in a lot of them.

In the US there are a lot of first responder groups (EMS, Fire, law) that are using higher-end consumer grade/cost drones. IFAK most do not have any ADS-B out capability. I suspect /hope in time they will. There’s a bit of a paradigm shift shift since the drones are typically below 400 feet, and often used in the 100 to 200 foot AGL range. These drones live in an AGL world.
Telemetry from the drones to the hand-held controller contains GPS information and the altitude relative to the take-off position obtains via pressure sensor. I’m working on systems that, can obtain the elevation of the take-off point and computer the AGL of the drone when an Internet connection is available. An ADS-B receiver is used to determine if nearby aircraft are close and low enough to be of concern. A key concept here is everything shifts to “AGL”. The goal is to provide a system that using the current “state of information” to provide emergency responders with information that they can use to conduct safe drone operations, in particular to avoid other aircraft. 30 seconds warning can provide enough time to get low or land. Everything is so low to the ground that a lot of things that work for non-drone aircraft don’t work. This includes receiving and transmitting any information.
AFAIK, there is no system in place for drones to report location information via the Internet to the FAA. This would be a very complex undertaking given the volume of data and the need for authentication of a submitter.
Drone tracking has its own quirks mostly relating to low altitude operations and the need to work in AGL. There is also a need to understand local obstructions (towers), height of trees in the area, and local terrain changes. There is a small ADS-B device available (ping200X) for larger drone platforms. The smaller platforms (such as the DJI Mavic series) don’t have anywhere to add on something like this.
There is a lot of economic pressure to use $2,000 to $10,000 drones that are considered high-end consumer . Add in requirements for periodic testing and re-certification and it seems clear that integrating drones into the National air space will have some unique challenges. I suspect the litmus test for the success or percentage of adoption of these systems may be as “simple” as “Can I get a small drone with high resolution thermal imaging and all the tracking for less than $8,000 ?”
I hope all this happens, there are groups working on it. Especially for emergency responders, integrating drones into the tool box available to them that can work with other aircraft in the area will be huge win.
All the usual AFAIK and IMHO caveats here…

There’s a Remote ID system that will be required in US by sometime in 2023. https://www.faa.gov/uas/getting_started/remote_id/drone_pilots/ Most drones will not be allowed to use ads-b out because that system could not handle the additional number of drone ids on the system. 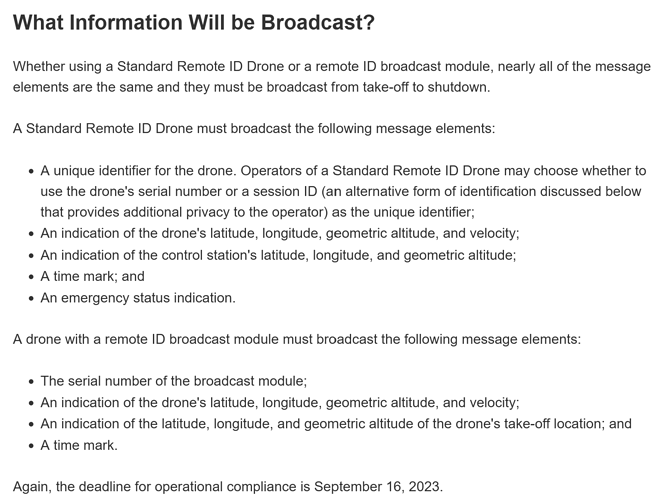 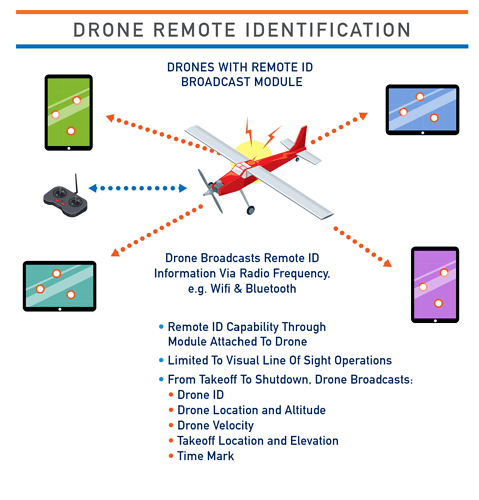 Look for a dumpdrone or similar on github within a year or two of that tracking system coming into use.

Oh No, they fly at just few thousand feet!?, these are multiple types of crafts and modified drones!, used over civilian or residential areas!.. I have got tons of pic/videos captured with tail no etc?, so this is with evidence, not some casual comments.

Thank you turbodog…it is indeed interesting…!.

in US, is it not the flight aware run based in US??.

FLARM, will check more about this?

also, the question and the answers can apply to any country, any audience…! fyi.

these are multiple types of crafts and modified drones

Those small commercial drones don’t have any tracking systems on them. Not yet.

Sure, anyone can ask those kinds of questions but your OP raised a big flag. Some countries are prickly about ways to track how citizens are surveilled. I was only pointing that out in case you were in one of them. If it doesn’t apply then just ignore it.

will check more about this

FLARM is proprietary electronic system used to selectively alert pilots to potential collisions between aircraft. It is not formally an implementation of ADS-B, as it is optimized for the specific needs of light aircraft, not for long-range communication or ATC interaction. FLARM is a portmanteau of "flight" and "alarm". The installation of all physical FLARM devices is approved as a “Standard Change”, and the PowerFLARM Core specifically as a “Minor Change” by the European Aviation Safety Age FL...

Not sure if this even applicable for drones, but i know that lots of light weight aircraft are using it.

You can check if if you see any drones:

Thanks for the info and link fox!..

There have been some updates on the FAA website this page was updated in March 2022 https://www.faa.gov/uas/getting_started/remote_id/industry/ Drone manufacturers have until September 16, 2022 to comply with the final rule Following public comments and technical challenges, the FAA decided to eliminate the NPRM “Limited Remote Identification UAS” category to transmit remote ID messages through an internet connection to a third-party service provider remote ID UAS Service Supplier. This option has been replaced by the remote ID broadcast module option that allows for retrofit of existing drones.
By September 16, 2023:
Commercial and recreational UAS drone pilots must meet one of the three ways to comply with the rule when flying their drone.

I used to fly a drone. Huge fun but it was easy to see that rules were coming because of all the reckless “pilots”. There were all sorts of YouTube videos showing the kinds of infractions drone pilots were causing. My favorite was a panning shot of really beautiful mountains and snow that ended when the drone rotated to pointing right at a runway and the drone was perfectly positioned on the centerline in the glide slope of an active airport. Pilots like that got us excluded from national parks and many other scenic spots. Drones are now regulated out of many or most interesting locations. It’s a shame but everyone knew it was coming and just a matter of time.

We just put solar panels on our roof and I looked again at a drone to make periodic inspection easy. Unfortunately we’re just within a 5 mile airport radius which makes flying even more onerous even though I’d just be flying low overhead. We do have aircraft fly directly over the house but they are a few thousand feet above by the time they get to us. But just flying 20-30’ AGL - not getting anywhere close to where the airplanes are flying - is regulated hard since we’re in that 5 mile radius. Ladder it is.

Why we can’t have nice things…

It can be useful to have a pole with a camera mount on the end if you have a way to get a live view or shutter control. Sometimes there are videos on youtube showing ideas on a similar topic