I live a little short of the local private plane runway. Many planes are private owned jets. It gets a little noisy around here at times like when theNat Guard fill their fuel tanks. Yesterday a military plane did what sounded like touch and goes which are not supposed to happen there. The plane in question was like the Marines propeller facing forward or up like a helicopter. It was navy gray and literally shook the walls in my house. Any thoughts as to what was going on?

The aircraft you are describing is an Osprey 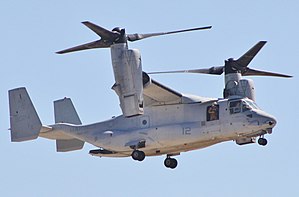 The Bell Boeing V-22 Osprey is an American multi-mission, tiltrotor military aircraft with both vertical takeoff and landing (VTOL) and short takeoff and landing (STOL) capabilities. It is designed to combine the functionality of a conventional helicopter with the long-range, high-speed cruise performance of a turboprop aircraft. In 1980, the failure of Operation Eagle Claw (during the Iran hostage crisis) underscored that there were military roles for which neither conventional helicopters n...

Thank you, I was wondering why they were doing that at a smaller local airport.