FYI: Alternatives to Raspberry Pi for this hobby

Not sure about the accuracy, but i’ve checked five links to a dealer in my country. None are in stock

Then it is very accurate : ) , according to the In stock column there are not in stock anywhere in Germany or almost anywhere else, for that matter.

there are not in stock anywhere in Germany or almost anywhere else,

I could create a new station without a Pi, and that for US$48 all inclusive (cost of thin client + power supply unit + shipment).

Both are running fine, not a bad bargain for € 15 in total, always handy to have some back-up hardware waiting in the drawer when needed

Yes indeed, it’s always a good idea to have spares and that’s quite a bargain. 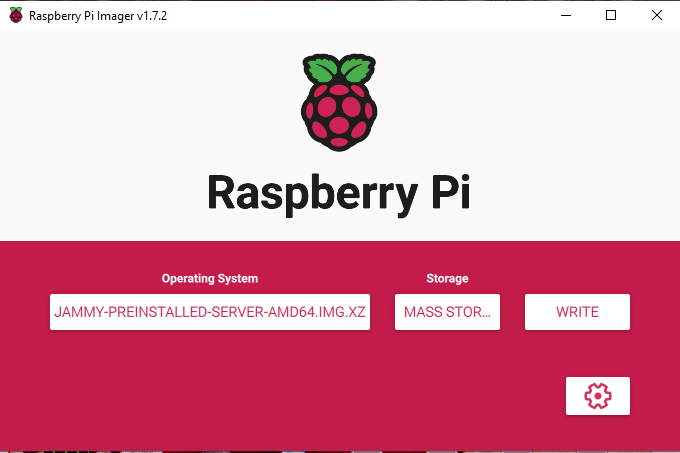 microSD card partitions after writing the image and before first boot

The list command above will bring a list of all active nearby wifi connections, including your home wifi.

Connect to your wifi

I don’t NEED any more PCs here but still tempted by these thin clients, particularly as they are fanless and run off a power pack. Browsing eBay at the moment. How do I sneak another box into the house?

Offer her a pair of shoes in exchange

On my thin client HP T520, I have tried Debian 11.3, Ubuntu Server 22.04, & DietPi, and found that for ADSB, DietPi is better than the other two as it is much lighter and faster than Debian & Ubuntu. 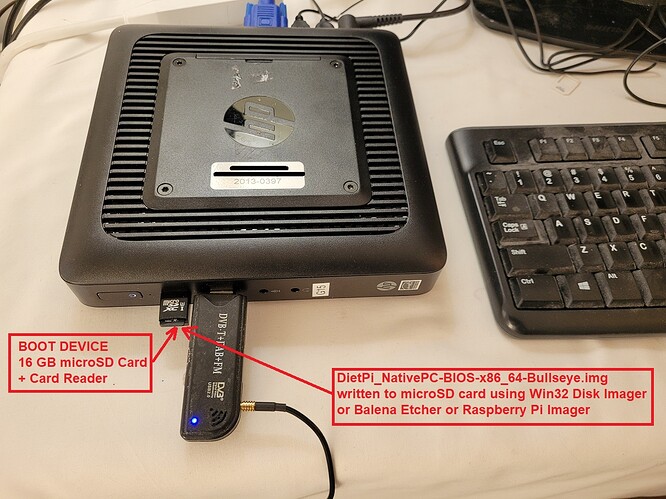 Interesting subject to talk about. I have plenty of Raspberry Pi’s to do the job but I also have a few older Dell Laptops I repurposed after I had replaced the screens. One is used for Airspy Spyaware server and one for running trunking program with SDR’s for our county’s P25 system.

Offer her a pair of shoes in exchange

The T630 seems to be the fastest of the HP clients that is still affordable. Also offers larger expansion of RAM and SSD so a fair price IMHO.

True.
You guys in UK are lucky. We in Canada cannot benefit from this because shipping charges from UK to Canada are very high.

The choices on eBay from USA sellers are much less than UK sellers, and shipping to Canada is very high (though less than that from UK). This is very irritating as Canada is next-door to USA.

Now we know where all the Raspberries went to

However I faced a problem that the Thin-Client went to “suspend” mode after about 15 minutes, and wont come out of it even if I click any key on keyboard, or click mouse, or pressed the power button. When in suspended mode, SSH, piaware, & dump1090-fa stopped working. The only way I could tak it out of suspension was to disconnect then reconnect power.

I disabled “suspended” mode from Gnome settings, as shown below, but suspension did not stop 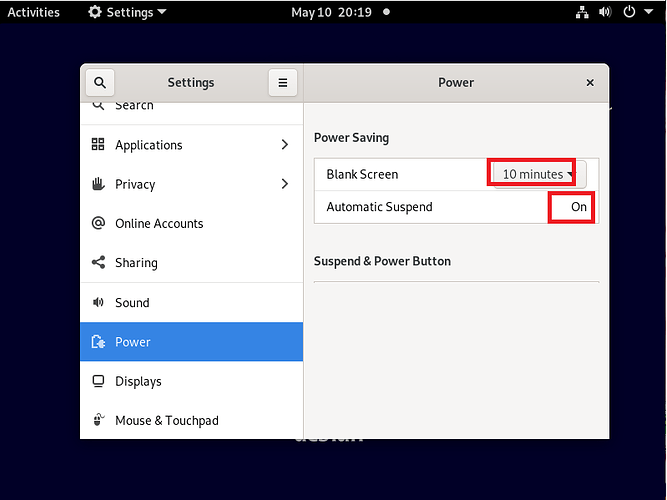 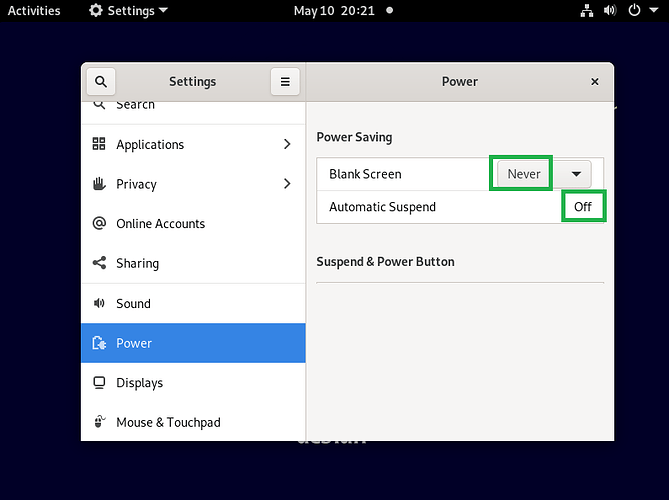 I then got fed up and decided to re-install Debian 11.3 , but this time without “Desktop Environment” and “Gnome”, i.e. headless or as Server, as shown below. By this way of installation, the Debian 11 stopped suspending. 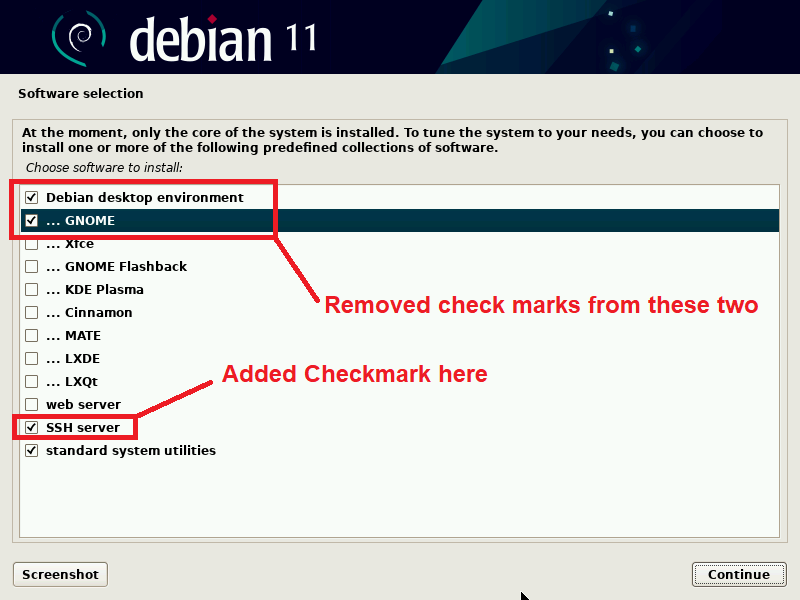 This “headless” or “server” installation of Debian 11.3 fixed the problem of “suspension”. However I lost facility to configure WiFi and Fixed IP. I solved this by installing Network Manager and run nmtui 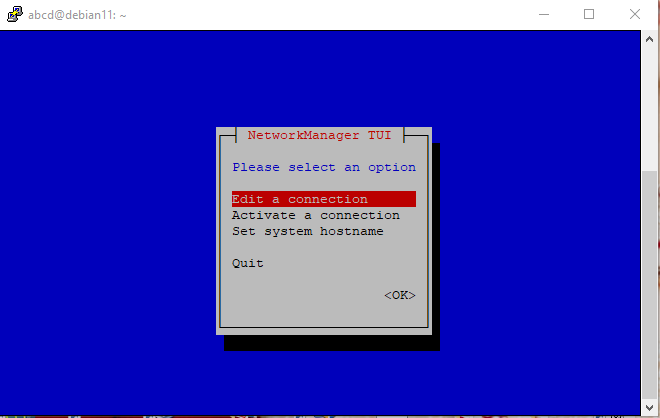 NOTE: Before configuring WiFi by Network Manager as above, I still had to install driver for Broadcom’s on-board WiFi module (BCM43228 802.11a/b/g/n) as shown in this post: Debian 11 - Activating On-Board WiFi Adapter of Thin-Client HP T520

Running dumphfdl on a thin client

First, the tl;dr version. I installed dumphfdl on the thin client I bought to see how it performed and what I could get in the HF realm with my very modest resources. The unit did not really break a sweat processing signals, though a setup with a more proper HF SDR may extract a few more resources than I experienced. In the end I collected data and got it displayed which is an overall success for me. The quantity/quality of what I got varied a lot, though. End tl;dr.

Second, a more detailed explanation if you are interested. My reasons for the project were several: interest in HFDL, finding a use for the thin client and learning more about SDR which I had minimal knowledge of beforehand. I decided to use only the resources, material & physical location, I had at hand. The setup is the following:

Being new to SDR compiling things from source was a learning curve and there were a couple bumps in the road. But re-reading the documentation or a Google search got me back on track. After software installation the next challenge was finding an antenna location in the 4.5mx3.75m spare bedroom which serves as my computer workspace/man cave. My ADS-B setup, antenna and all, is in one corner of this room. I ended up putting the thin client in another corner, running the wire up the center of the room to hang off a hook and back down to the opposite corner. An (almost) inverted V shape.

After starting dumphfdl I soon began to see the limitations of direct sampling to achieve HF reception with the RTL-SDR. I knew about this beforehand, but only from reading about it, not real world experience. While my antenna is simplistic, looking at what I received in GQRX was not too bad. It was the direct sampling with things outside one’s hands – no gain control, aliasing, overloading by strong siganls – which caused performance to be a random event. It was like eating in an Army chow hall. You will take what you get and like it. No complaints allowed. Several bands were just not usable. The 8 Mhz band was really the only one I could reliably get collection from, so I camped out there. Shannon, Reykjavik and (after sunset) Canaries were heard. 1800Z-0600Z was the best window for me.

This is not to say you can’t get data with the RTL-SDR, but keep your expectations low so you will be surprised when you get something interesting. It is cool to see an Air China flight over Russia on HFDL and then see the same plane on your ADS-B feed 2 hours later. Below is a screenshot of as good as it got for me. Time to think about an HF SDR upgrade.

My T620 has an AMD dual-core processor @1.65Ghz. Tasking up a set of frequencies in a single HFDL band is between roughly 100khz and 200khz of bandwidth. A sample rate of 250K is sufficient for this scenario and my CPU use was 20%.

If one wants to collect frequencies in different bands concurrently more care needs to be taken. In my situation the Shannon ground station, which provides a large part of the messages I receive, operates often on both 8942khz and 10081khz through the day, Tasking just the frequencies in the 8Mhz band limits the number of aircraft I see. I want both frequencies. Adding 10081khz to the mix increases the bandwidth substantially and has the knock-on effect of taking more CPU (and maybe all).

Using the rule of thumb that 80% of the sample rate will be your available bandwith and my case as an example:

I rounded up the result to 1475000 and used that in dumphfdl for my sample rate. (Note: the RTL-SDR Blog v3 supports sample rates 225K-300K and 900K-3.2M.). My CPU usage is now at 70%. Everything still works and I am happy getting more data, but at this rate my hardware is close to being max’d out. Approx. 1.2-1-4 Mhz of bandwidth is what I can get out of it. Something to keep in mind if you plan to use a thin client for this purpose.

So, I could take my DUMPHFDL data and use combine 1090 to display it on TAR1090 map?
Please explain, I am interested.

So, I could take my DUMPHFDL data and use combine 1090 to display it on TAR1090 map?
Please explain, I am interested.

Combining multiple receivers into one map - Combine1090 - #48 by rugomol plus next few posts.

@jaymot responded to your query already and I lifted the idea from a post of his on another thread.

Here is what I did. Replace IP as appropriate. This is way easier than VRS which I never was able to install & gave up.

This example is just for my HFDL data. Edit combine1090 as needed if you want to view your ADS-B feed also.

If you have a recent install of combine1090, just adding the option to dumphfdl will be sufficient.
It pushes the data into that port which is by default opened.

The CUSTOM and SOURCES stuff in the config file is only necessary if combine1090 is asked to connect to a server / listen port. It’s not necessary if the data producing application connects to the combine1090 itself.

If your combine1090 has been install for a long time:

Reinstall combine1090 and the port will be open.

I did just that when I first tried to configure & got an error. Then I saw the custom section and figured I needed to use that. Since it worked, I thought that was the key. I must have fat-fingered something the first go around. I have removed the custom bit and yeah, it just works.