Along with a further 143 Raspbian Buster updates as I haven’t updated in a while!

Amongst those it also shows;

What I would like to know is it safe to just go ahead and issue sudo apt full-upgrade which will update the FA stuff along with dump1090-fa?

And can I finally take mlat-client off hold or have they still not fixed that annoying bug yet?

I always get nervous before updating my VR Pi as in addition to feeding FA it also feeds FR24, RB24 and ADSB-X and I am thinking about feeding Freedar - does anybody else here share data with Freedar as I done a search and nothing turned up…

If I was in your place, I will simply use a SPARE microSD card to write Raspberry Pi OS Bullseye, then install lateat versions of all feeders.

And can I finally take mlat-client off hold or have they still not fixed that annoying bug yet?

MLAT not working after Raspi update and selecting yes instead of no for rbfeeder - July 16, 2022

Thanks for the reply abcd,

I have 5 Pi’s carrying out various tasks and I like to keep them all the same so not planning to update from Buster to Bullseye on just one of them at the moment.

Likewise not planning to update all 5 to Bullseye at the moment either!

Are we saying that FA 7.2 is Bullseye only and will not run under Buster and if so does that mean that dump1090-fa v7.2 is also Bullseye specific?

If it is not recommended I update either while still running Buster do you think it would be OK to do what I currently do with mlat-client and put a sudo apt-mark hold on both piaware and dump1090 just so I can continue to update the rest of my system?

If so what filenames would I use to stop piaware being updated based upon the above apt list --upgradable as although it looks easy to add dump1090-fa I am confused as to what I should add for the remaining piaware-repository/unknown and piaware-unknown unless it is as simple as specifying piaware?

I also notice rbfeeder has an update so fingers crossed that won’t upset anything;

I do have a recent clone of my currently working system so can always revert to that in the event of a meltdown but I’m just trying to minimise the impact of updating in the first place.

I’ll retain the hold on mlat-client as I have no faith whatsoever in AirNav ever fixing that particular bug if waiting for them to fix the annoying bug of not being able to highlight aircraft in their v6.02.003 Windows app since they modified it to support their ludicrously overpriced XRange devices in 2017/2018 is anything to go by not to mention many more bugs some of which I was reporting back in 2008

If you recall it was you who recommended I use the hold on mlat-client some time ago and that has worked exactly as it should have done and prevented it getting overwritten by the buggy version.

Are we saying that FA 7.2 is Bullseye only and will not run under Buster and if so does that mean that dump1090-fa v7.2 is also Bullseye specific?

To verify, run these commands: 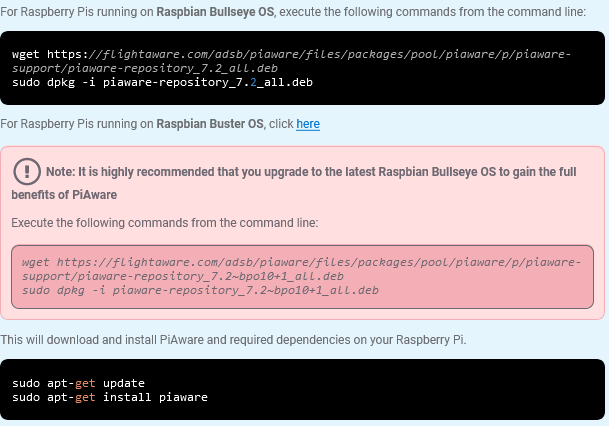 Ah that would explain why I see ‘bpo10’ references when I run apt list --upgradable;

The commands you suggest I run return;;

Thanks for the link abcd…I’ve read that and other stuff but but as usual the more I read the more confused I get so do you think it would be OK to just run sudo apt full-upgrade and let it take care of itself along with the system updates or should I upgrade piaware by itself using the following;

If I have to install it by itself should I then also sudo apt-get install dump1090-fa afterwards?

You know me abcd…I need it spelt out in plain English and some hand-holding before I commit even though I have a cloned micro SD Card waiting to go just in case and it usually seems to work anyway!

I think running sudo apt full-upgrade will be a huge upgrade, as it will upgrade the OS from Buster to Bullseye.

Thanks again abcd…although I did update all five of my other Pi 4’s yesterday using sudo apt full-upgrade and they’re definitely still all on Raspbian GNU/Linux 10 (buster)?

But you are probably right in that I should play it safe and do it in stages.

I think running sudo apt full-upgrade will be a huge upgrade, as it will upgrade the OS from Buster to Bullseye.

No it won’t, unless you’ve also changed your apt sources list to the Bullseye repos.

No it won’t, unless you’ve also changed your apt sources list to the Bullseye repo

You are right. It wont without adding Bullseye repo in apt sources list.

I did upgraded Buster to Bullseye by adding bullseye repo to buster, and even posted the method last year, but completely forgot it now. Seems aging is taking its toll.

completely forgot it now. Seems aging is taking its toll.

I’m right there with you on that. I spend some time nearly every day thinking about the hereafter. I walk across the room then stop and think, “What am I here after?”

Wait ‘til you get to be my age (pushin’ 80). Then you’ll need to think about how to get across the room before wondering why you want to go there…

Well just to close the loop on this thread its taken me all this time to pluck up the courage to update my VR Pi and as before there was actually nothing to worry about when it came to it.

Not only did I clone the spare SD card I keep plugged in at all times but I also cloned a second one just in case such was my paranoia so if worst came to worst I could just slot in another SD card and of course if that one had an issue I had my second cloned SD card I could switch in!

A quick sudo apt update followed by sudo apt full-upgrade just went through the process of updating everything with only two prompts - one about whether to keep or replace /etc/lighttpd/conf-available/89-skyaware.conf and the other offering the same decision on whether to keep or replace /etc/rbfeeder.ini and I chose the default option on both which was to keep current version.

A quick sudo reboot and the Pi came straight back up with everything appearing to work perfectly as before!

So a quick thank you to those who gave me the confidence to forge ahead with the update. Cheers!

Gives me more confidence to update in the future but I won’t leave it so long next time.

Does anybody know what those differences are and is there an easy way to compare the differences retrospectively?

So did you also update to Bullseye or you still on Buster ? just curious.