Looking at my message rates in skyaware it seems like the message rate is low with respect to the number of aircraft with positions. this is with an Airspy Mini running on an Odriod @ 20Mhz sample rate I never see more than 1650 / sec. Range is Good Just message rate seems low??

That’s a higher rate than I have ever seen with comparable numbers. Also you see much further than me. Looks fine to me.

Ok Thanks , seemed to look low and now that range is pretty much at the max am lloking for the next thing to improve

Your message rate looks ok to me. You won’t see the same high message rates that are common in Europe because much of those extra messages are a result of ground interrogations. For whatever reason, the system used in the US and Canada results in each aircraft transmitting fewer messages.

My average, in US, is about 6.5-7 messages/aircraft.sec (counting aircraft without positions).
You have about that value too.

PS: Don’t know where that comes from. I could find only this table: 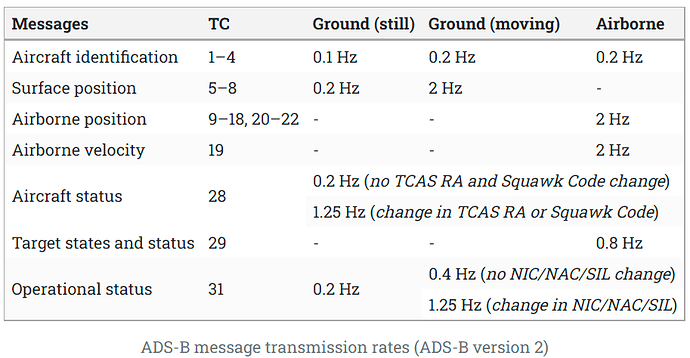 That makes perfect sense then as I’m usually in that same 6 to max 8 message per plane range. I didn’t pay attention to whether the higher message rates I was comparing against were from a site in Europe.
Thanks!

Tell us about your set-up because it looks amazing!