With the release of 6.0, I decided it was time for a refresh of my home site Link. I already had a Raspberry Pi 4 (hw ver 1.1) that was running fine, but ended up not working exactly like I want (you will see an i2c sensor that I apparently forgot about as well as some old wiring that went to an Arduino and a battery controller that have been since removed because it lives on a UPS now).

This system is not the easiest to get to (nor the hardest) since it’s in a network cabinet about 10’ up in my master closet. I built a new station and programmed everything on it with a new feeder ID. I assembled a RTC onto a new Adafruit GPS hat, since the old system was a local NTP server (that also fed the NTP pool) I figured a RTC would be a good investment. I tested the new build for a few days, tweaking settings and making sure it was reliable. This morning I pulled the old system out: 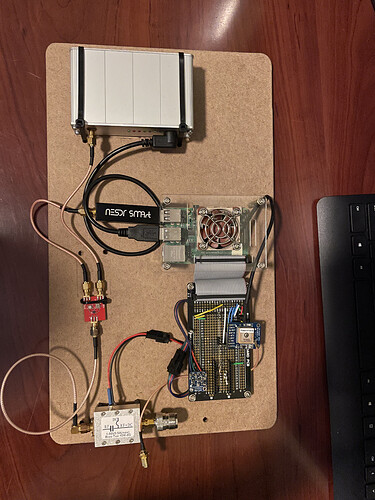 Moved the Raspberry Pi to another room (gotta keep the feeder uptime streak going) and I assembled the new system: 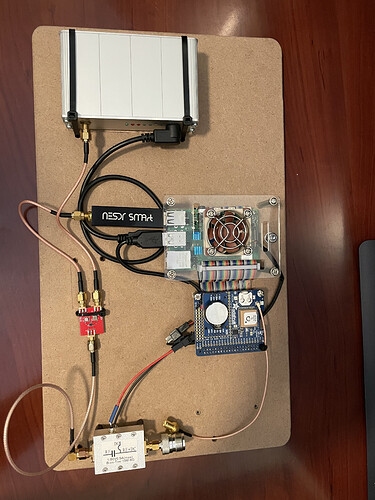 I did forget the bias-tee and fan needed power, so I chopped a USB cable end off and soldered the headers for both onto it, but otherwise it was a pretty easy swap over.

I tightened the SMA connectors, moved it back to the network rack (added a magnet so that it could live in the back of the rack) and fired her up!

Once it was online, I powered off the old Pi and copied the feeder ID to the new one, restarted PiAware and I was off to the races. 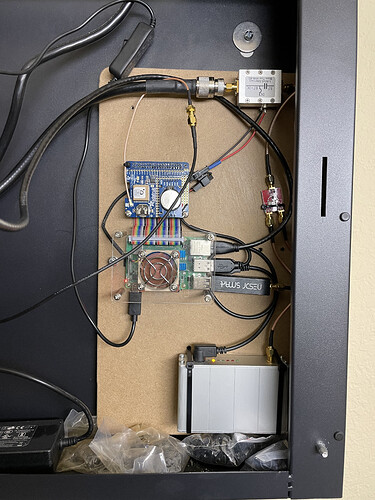 Not the prettiest deployment here by far, but it does ok. I’ve already peaked around 680 msg/sec so I feel like there are no glaring issues and my PPS NTP server is pretty stable. I’ll have to tune that a bit but the error has more zeros than my bank account (by far) so that’s probably good enough for now.