As many may be doing, I’m pushing my data to VRS. Whilst my message rates on actual ADS-B are ‘hundreds’ a second, I notice my MLAT rate to be extremely low…i.e. around a dozen a minute.

Shouldn’t the MLAT message rate be constant? All I see is around a dozen messages every minute and thus my map isn’t being updated regularly.

The connection to VRS is good and I’ve checked the connection logs. Also attempted a push rather than pull (as it’s configured) to ensure I’ve not got a connection issue…same. I have set a location.

I run two physical feeds and both are exhibiting the same very low and infrequent MLAT message count. Is this normal? I’m so sure that historically the MLAT messaging was clearly lower than actual messaging but regular. Any thoughts? Is the MLAT updating back to local clients limited in some way?

Can I check anything to make sure all is well?

As far as i understand VRS is taking one or the other source. So if there’s an ADS-B Source from your receiver, it might not be taken from MLAT as source.

Did you setup VRS properly for the MLAT usage? Normally you will need a second connect via a different port (30005 and 30105 if i am not wrong)

Thanks for the reply foxhunter.

I’ve run with VRS since it’s very early days and yes, I’ve two ‘pulls’ set up, one for ADS-B and one for MLAT.

piaware config mlat-results-format set correctly to ‘listen’ on 30105 in the right format. Connects fine logs look good…but rate desperately low. Believe it’s not VRS but piaware (or the fa-mlat-client) itself…i.e. not receiving many messages for relying on.

Have no idea why though.

No, I wouldn’t expect it to be. If the majority of the traffic you are hearing has ads-b position reports then you will be receiving very little mlat.
See this post:

Yes, based on a local decision (i.e. the local receiver will start to feed data for mlat if it does not see ADS-B positions for a while). It is fairly common to have aircraft that are on the edge of your receiver range which are ADS-B equipped, but where the low signal strength means that only occasional short Mode S messages (e.g. DF11) are successfully received. The longer DF17 ADS-B messages that carry position information have too many errors to be decoded. In that case you’ll see mlat bas…

It’s 23:45 here on Saturday evening 24 Jul, on what should have been a very busy day due to prediction of a holiday getaway. However, for reasons unknown, my MLAT is remarkably low (see black line, compare today to previous 6 days)… 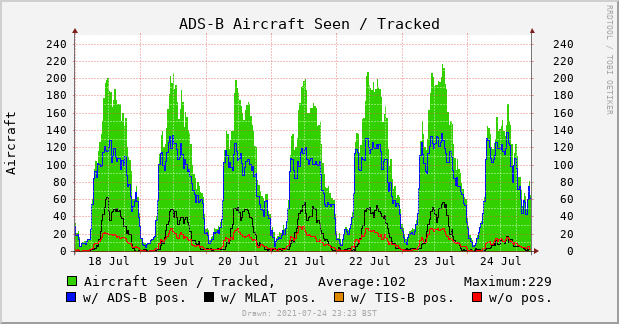 I’m begining to think there is a technical issue, but I’m synched with 550+ nearby receivers, so this result today is unusual.

as are MLAT Aircraft…

I’m based in UK. Anyone else seeing this kind of result?
Just curious.

The UK weather forecast had warnings for severe thunderstorms and potential heavy rain. I expect a lot of GA pilots chose to stay on the ground rather than get caught up in that. It’s pretty common for there to be far fewer mlat aircraft when bad weather is forecast, since GA aircraft make up the majority of that traffic these days.

Notice that the number of ads-b aircraft (which is mostly commercial traffic) in your graph shown by the blue line is pretty consistent with the previous days.

I don’t think the weather was actually that bad yesterday in most places, but I expect most people had already made other plans. I saw a very similar pattern, so I doubt there is any issue with your receiver:

I am located in Germany and have the same MLAT drop yesterday.
Most of the times small aircraft deliver MLAT, so i think yesterday was simply less traffic caused by private owners.

What a difference 48 hours can make: 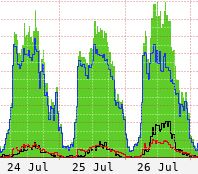 26 July was back to “normal” due to improved weather conditions.

I had not quite appreciated until now how much the MLAT result correlates with the weather conditions!