I’ve been slowly adjusting the FlightFeeder Orange box gain in an attempt to get the best results. Like most, just based on the number of ‘overloads’. I’m curious how FA implements the gain function. Does lowering the gain affect the front-end noise figure? Or is it simply an adjustment further down the RF chain where it has minimal impact on NF? I’d like to lower the gain a bit more, but not at the expense at raising the front-end NF.

I guess another question would be “Is there even a FE amp?” or does the antenna feed right into the A/D chip and the NF is determined by the A/D chip?

Sure would be nice to see a cascade analysis of the RF chain!

Sorry if this has been discussed, I checked around the forum and didn’t see any comments pertaining to this question. Plenty of NF comments, just none for gain vs. NF.

The Orange FF internally uses a Prostick. All of the variable gain is in the tuner (R820T2).

I also struggle to find “the best” settings for my setup etc…
I know it will always be a balance, but without having a stable reference, it’s very hard to tweak things, unless you use the auto-gain feature by @wiedehopf to achieve a balance.

It’s a flightfeeder, so no he won’t.

Don’t think front-end NF is really the issue with this setup, main issue is the ADC at some point running out of dynamic range probably.
If you’re anywhere with other receivers there is usually no need for super long range, thus reducing the gain to get the local stuff is exactly what you want.

Before going below -32 dBFS or so for the weakest signal on rtl-sdr SDRs typically not much if any range is lost.
The RSSI will drop lower but typically it’s accompanied with slightly reduced range.

Does lowering the gain affect the front-end noise figure?

Technical:
The NF of the receiver chip R820T2 (A/D) is about 3.5 dB, but the FF has an extra amp chip on board, with lower NF (SKY 7150). However, it doesn’t have a SAW filter.
However, longer antenna cables (attenuation) will degrade that NF. I am using a filtered LNA at the antenna and lower the gain at receiver.

This is the FF receiver stick. 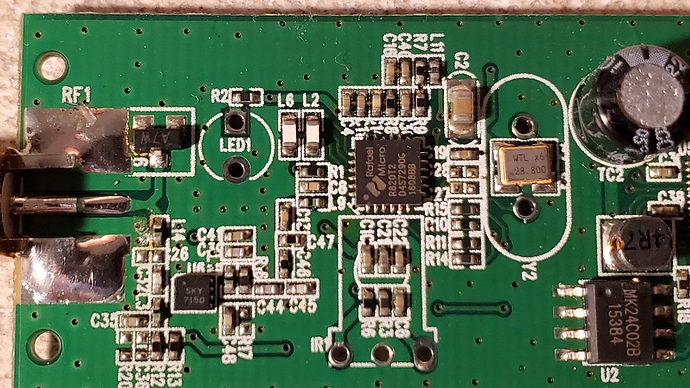 Practically the NF and gain don’t make too much of a difference. Too high of a gain can overload receiver, but once you fix that, the ADC dynamic range is more important.

The range limiting factor in most cases are the obstructions at local horizon. The ADS-B signals are fairly strong, when I “lose” a plane is not because the signal dropped below a threshold, but because is suddenly obscured. Line of sight.

Look at the map, for signal levels at the edge of reception versus signals at closer range.
I have max 3dB level drop between 50 miles and 200 miles. Some smaller planes have lower levels close-by than the far-away ones when they disappear.
So it’s not the level that makes them disappear.

Your comment pretty much told me what I was looking for. The LNA sets the NF, and the gain setting likey doesn’t impact the NF much (can’t be positive since I don’t have a cascade analysis). The Skyworks 7150 has a pretty impressive NF!!

wiedehopf - Yep, understand the in the impact of overloading the ADC. I was concerned that by lowering the gain to reduce overloads, that I was potentially impacting the NF which would affect the my distant plane count. With a seperate LNA and the gain setting being inside the R820T2, overall NF is likely still OK, regardless of the gain setting (within reason).

So the takeaway here is that it appears I can lower the gain based on overloads and not be too concerned w/the noise figure being adversely affected. That’s good to know.

A sidebar: In the ‘request thread’, I mentioned it would be nice to see a plot of total RSSI (to spot overloads) on the stats page. Like all w/a FlightFeeder (not a Pi setup), it’s sort of ‘set gain’, ‘wait’, then ‘check overload count’…then rinse and repeat. If we had RSSI stats for a 24 hr period, that would be nice to see to help set gain. I should add, the FlightFeeder is in an awkward location, so seeing the info on the stats page would be a lot easier for me that checking the FlightFeeder itself. I guessing the Pi guys probably can already do something like this.

Thanks to everyone that chimed in, much appreciated!

Myself I got a higher Dynamic Range ADC converter, in the Airspy receivers.
With a LNA filter up front.

So does the AirSpy ADC have a higher intercept point? Same number of bits as the Fight Feeder ADC?

Other dongles use the 8 bit ADC inside RTL2932U. The chip’s datasheet comes with a non-disclosure agreement.

The IIP3 and other RF data are similar with other dongles, since are derived from the commonly used R820T2 chip capabilities.

Thanks for the info SoNic,

Part of me wants to turn in my FlightFeeder hardware and do my own PI setup just so I can play around w/it more!

Part of me wants to turn in my FlightFeeder hardware and do my own PI setup just so I can play around w/it more!

I have a FlightFeeder for baseline. My other setup, fed from the same antenna, gets to be tinkered with.
Actually I have two sets or FF/PiAware combos - one for ADS-B1090MHz and one for the less exciting UAT 978MHz.

I actually have a PI2 and an old SDR that I tossed together w/a ‘cantenna’ for the other guys (i.e. FlightRadar). Not trying to improve the plane count like I am w/the FA hardware. Trees to the south is my biggest hindrance. Might bump the antenna up a few feet. But in the end, Mother Nature (i.e. trees) will win.

I actually have a PI2 and an old SDR that I tossed together w/a ‘cantenna’ for the other guys (i.e. FlightRadar).

If you want to dabble with a few options software wise, you could try this:
Raspbian Lite: ADS B receiver · wiedehopf/adsb-wiki Wiki · GitHub

It’s not that hard.
For the flight feeder blue you don’t need to adjust gain as it has no such adjustment and has very good dynamic range.

For the flight feeder orange i’d just set it so the weakest RSSI values you see are around -31 or something.
Unless you still have issues with saturation for nearby low flying targets, then you can reduce gain further.
But really it’s not complicated at all

Or exactly what is your gripe?
The autogain only adjusts once a day it’s for people who just don’t want to deal with the process, it’s far from perfect but better than leaving it at the default gain.

I have the FA (orange) hardware mounted high in our screened in porch, so setting gain is just a little bit of a chore. Plus when I do set it and check for overloads, it’s really just a snapshot of the flights. I’ve requested total RSSI readings over a 24 hr period to be added to the stats page (hope they do that), I think that would come in handy to help people manually adjust their gain. I sort of ‘eyeball’ the top ten or so RSSI readings on my SkyAware web page (I wish they had a total RSSI at the bottom of the table) too when I set the gain.

I should add I’m only about 1 mile from a small but fairly active airport and some of the local RSSI pings are way up there in strength. Almost 0dBm. And I usually track up to ~160 aircraft at a time, so total RSSI would really would be nice to know instead of climbing up to check the FA orange screen.

So I guess the take-away is I’d like to be a little more methodical with setting gain rather than trial and error. No biggie, just the ‘engineer in me’ to do it right.

I think the gain is about 31dB now.

It does appear the PI guys (and gals) really have access to a lot of neat data to analyze. Didn’t realize the auto-gain function was once a day, I figured it was more of like an AGC, albeit digitally controlled.