I’m posting for the first time to this forum, although I’ve been feeding a couple of years now.

After testing couple of home-made “normal” GP antennas I made from aluminium, I recently made a new bowtie antenna “drawn” to the PCB (in a bit old school way) just for fun to check if that would work ok. Since Finland isn’t necessarily the best location for tracking aircraft (it’s quite quiet here), the most of the traffic is situated mostly south. A yagi would have been quite an overshot, so I thought to try this. I know this one most probably has some issues with the impedance matching since I didn’t have time to measure the antenna with the vna or even add a sleeve balun, but it seems to perform rather ok.

While it seems to work somehow ok, I was thinking of maybe I should try also array of PCB-bowties. The problem is that I know very little about the arrays and especially phasing them correctly. I’m just wondering what would be the best approach - should I try to start with simply 2 parallel bowties (with or without some phase shifting) or straight to 4 setup with phase-shifting and 1:4 balun (using 75ohm coax though)…

Would anyone has any suggestions what to take into account with these kind of arrays? 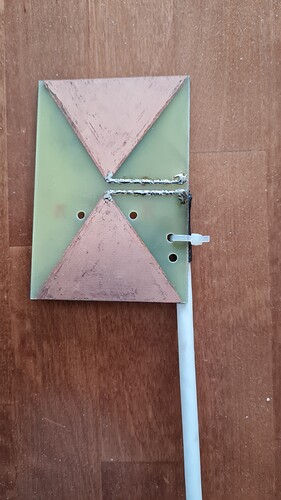 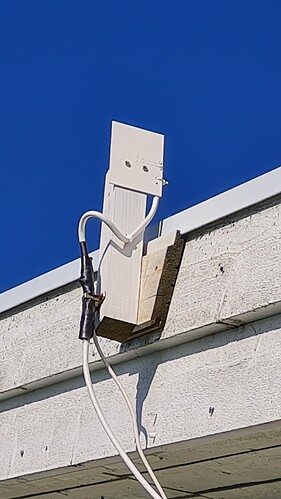 juei, some initial thoughts: a bowtie is a flattened biconical antenna which are known for being more broadband than a wire or rod dipole. While ADS-B reception needs only narrowband, the bowtie will be more tolerant of dimensional variances around the 1090 MHz target frequency accounting for your initial promising results. Phasing will get you directional characteristics and am reminded of the multiple bowtie arrays common among UHF television receiving antennas, most with a screen-type reflector for directionality. You might look into how those UHF TV antennas are phased for ideas.

Thanks, KI7GX, for your thoughts and suggestion!
I’ll give a look to those UHF TV bowtie-antennas for the phasing reference. It would be quite interesting to make some experiments with couple of PCB-bowties first without the reflector though, since even though the majority of the traffic is situated south from my position, there sure is some traffic around too (might be beneficial not to do it too tight in directionality perspective at first). Then after testing that for a while, I think I’ll add a reflector too and compare the results. I think the most fun is to experiment different configurations anyways.
Another interesting idea (not related to this traffic location issue at all) would be testing the opposite way and try to phase two bowties in 90 degree angle horizontally (N-S and E-W headings) and see if that works at all. Most probably not, but while e.g. my 5G-modem seems to have 4 x 4 bowties constructed in a way that it can be configured to alter between omnidirectionality and specific directional setup (+ more gain of course), it’s not impossible.
Anyways, thanks again for your thoughts!

For ADS-B, I’d think that usually you can get enough gain out of a reasonably-sized omni (or add a preamp) that you don’t need to worry about directional antennas for distant signals - for basically anything not obscured by the horizon or terrain, there’s usually enough power there already. More broadband antennas can also have problems with picking up more noise, the frontends of the rtlsdr dongles are very broadband and can easily get overloaded by out-of-band signals if there’s not much filtering (antenna or otherwise) in front of them.

Hi obj, thanks for your insights too!

Well, basically this all for me is just for experimenting different setups and learning from those trials. I did have couple of years ago a basic homemade GP antenna in the exact same spot and it performed quite well too and I’d (gu)estimate that the overall performance quite close in par with the bowtie. Maybe in position-wise this bowtie is not that good. However, it’s quite hard to compare since the traffic in overall has been decreased dramatically since I had the GP antenna.

Both of these setups consist of one LNA at the antenna end, 10m RG6/U coax, some connector converters and a power injector for the LNA. So quite the basic stuff there too.

The situation here, I believe, is that the majority of the intercontinental flights (Europe<->Asia) are now switched more to the southern route, which shows that the most of the aircrafts are in 100-175 nm range to the south of my position. Also the vertical position of the antenna is not ideal - I think that this would be the most beneficial point to improve, but I’d like to keep the same installation spot for a while in order to have even some basic environment factor isolation in testing.

Regarding the noise, that’s a very good point, thanks! That I have noticed too. A bandpass-filter would also be another a very good idea to test. This actually also would possibly apply to my ACARS/VDLM2 receiver & airband (approach audio) automatic recorder I’ve made with the commerical discone antenna, so this tip was very helpful in that case too. So I think I must obtain / build two band-pass filters for both 1090Mhz and 110-135Mhz.

Anyways, as you said, it most likely is that the array of these won’t perform better (or at all in my case). However, part of my objective is more to learn from different antenna setups (and mistakes I make), and most importantly, try to check if I’m able to produce anything useful at all. Thanks again for your insights! Those help me a lot in my learning process.

Actually, after thinking this a bit more, I’d say it might be beneficial to concentrate more on the filtering than the array trials as a first step. And considering that the usual cold winter is coming in couple of months, it would be even more convienent not to try to climb the ladders and fiddle with the antenna in some -30C freezing cold weather

And as said, really good points from you guys, I appreciate those a lot!

Living in a valley over here in Norway, but I guess most of what you say applies to me too. right now, a simple 1/4-spider antenna via a SDR-blog filtered LNA with an RTL-SDR gives me almost just a good reception as my (very) optimized 3-element 5/8 collinear (same type of LNA) with an Airspy V2/mini, that gives me the about the same as my SDRPlay-SDR. Still trying to break the laws of physics, lol … have also been thinking of an array of antennas, or just 2, since my valley runs N/S and the hills start close to my west, and a bit further out to the East. Couple that with multipath reflections from the lakes to the North and the South, well, it makes for tricky reception, to say the least, so I am looking forward to share some ideas with you. Can also make some PCB-antennas like yours and try it out… (the PCB-antennas I got from e-bay were all disasters, lol)

Hi hellhound604, a valley with closeby hills on both sides (in a fjord?) really does sound like a bit challenging environment. I think trying the PCB bowtie won’t at least from financial perspecive hurt too much; building just one first out of an eurocard sized PCB is very inexpensive and quite easy to check if there’s any difference at all

It could be that in your environment it would be even a bit more beneficial to try this than in mine - I don’t have that much of physical obstacles, other than too low mounting point. My point with all this is more about experimenting different antenna types with minimum budget and hopefully gathering some experience while building those.

Regarding the LNAs; during these couple of years I’ve been only using several of sort of a bulk sub-10€ LNAs and only one has been failed so far. And that wasn’t during the winter - it was due to my poor weather insulation in a hurry, which exposed it (and the coax) to the water damage.

And as obj said, the band-pass filter would be very good to have with this PCB-bowtie, but if you already have filtered LNA, I suspect that it’s sorted out for you already

I, however, need to sort out if I could find one of those within EU to buy (==no customs “paperwork”). There’s always an option to try to build one, but I suspect that my abilities are too limited to do that and I think it’s not worth it.

Coming back to this topic a bit; the bowtie antenna now has also the SAW filter, which didn’t make much difference to be honest. I guess the impedance mismatch and a fact that the center freq of this antenna is a bit too high is effecting a bit too much. But was fun to check anyways.
Here’s also the distance / direction chart of this antenna measured for about 2 hours of time. During that time there were not that much of a traffic, but I think this shows the directionality of bowtie a bit. A comparison to a bit misplaced spider antenna (marked as E) is still to be done after I manage to code the switch of the antenna details between two antennas.

Always good to have a play and see how equipment really performs, but to make your plot meaningful given the expected lobes of a bowtie, you need to specify the orientation of the antenna.
Also, without knowing your terrain, not much can be deduced from your plot.

That’s true, I should have opened a bit about that too. So the antenna is placed “facing” (magnetic) south-north axis as the majority of the traffic is is found at south. The terrain is quite flat here, but the antenna placement could be much better, since it’s too low currently and the steel roof might give too much reflections also.

One thing I would love to test in future is to code that plotter to be able place some common antenna patterns (e.g. bowtie in this case) as a reference. Combining that to some kind of antenna (and reference) orientation setting, it might give a comparison to possibly find out a better placement for the antenna i.e. check the uncovered areas. But then again, it probably won’t be worth the time it requires - I would guess that the result would be too uncertain to give any meaningful information.

I would try a homemade Yagi next. You could make one from solid copper wire and a piece of 2x2 lumber as the boom or something, maybe a wooden meter stick. The more elements the more gain but IIRC it’s at the expense of beam width. Online Calculator .:. Yagi Uda Antenna based on DL6WU

That’s actually something I’ve been planning to give a try for a rather long time. Basically just for gathering some more experience on those too - not necessarily related to ADS-B receiving though

I think I do have already the needed materials; aluminium rods for directors, a dipole-element and a reflector and some PVC-tubing as a boom would be a starting point for that. And just to keep it a bit more simple, I think it should have maximum of 5 elements, so it won’t be too long and not to have too narrow pattern. But the most concerning parts in that thought of mine were actually how to keep the connections corrosive-free enough and how to make a proper balun. I’m a bit worried that I cannot make the coaxial balun efficient/neat enough to match properly the impendance. Winding a ferrite ring balun would be one option, but might be too impractical.

Well, I hope I some day have time to try it. And as always, failure is also a very probable option there, but it doesn’t matter as it gives the best experience how not to do it