I bought one of those PCB ADS-B antennas in a white plastic case that are touted as having 12dB of gain. It seems to work fine but I’m still puzzled by the design. I just found a large image of the circuit board:

(Click the thumbnail to see the full-size image.) Does anyone know or care to guess what sort of antenna this is or how it works?

Friend of mine is using a shorter one, but looks similar inside. It works but his DIY antenna outperforms it.

I doubt it’s really 12 dB or just a marketing gag.
Antennas with values between 5 and 9 dB are usually much longer

I’m not concerned about the gain, I just want to know what the heck kind of antenna it is. I’ve never seen anything like it.

I just want to know what the heck kind of antenna it is. I’ve never seen anything like it.

I’m not concerned about the gain

But there must be something why you selected this one

Ah, thanks. I read that a while before I decided to buy rather than build an antenna so I didn’t pay much attention at the time. (I should have. I might have chosen a differently-designed one.)

It seems that the field test was never done but my observations based on number of aircraft seen and messages received within my current range seem to back up the gain findings from your simulation: marginally though noticeably better than the cantenna I was using. For example, a flight crossing my entire range at 35,00 feet gives me perhaps 7,000 messages vs. 6,000 with the cantenna. Now I’m wondering what they’d be if I had a better antenna like a co-co. The problem is obtaining coax with a known velocity factor in SE Asia. (Edit: I actually found some, made here in the Philippines: https://www.philflex.com/rg6-coaxial-cable)

But there must be something why you selected this one

Availability, mainly. After I managed to put my first cantenna into my second-storey gutter where I couldn’t recover it I got discouraged and decided to just buy an antenna and be done with it and that was the only one I could find on Lazada Philippines that came in the sealed case. (I was trying to get the cantenna higher. I succeeded after a fashion, I suppose.

) I ended up building another cantenna to use while waiting for the PCB antenna to arrive. I still have it as a spare antenna.

Now I’m wondering what they’d be if I had a better antenna like a co-co. The problem is obtaining coax with a known velocity factor

Just one point. Lots of people build and test the Co-Co naked, and then they put a sleeve over it without retesting and trimming. The sleeve has quite a big impact on it. I would suggest making the co-co, but without soldering it. Connect your VNA, tune it, and then slowly slide the sleeve over it and see how the VSWR moves, so, if the resonance point moves 10% down in frequency with the sleeve, you need to shorten the elements by 10%, and so on.

I think I’ll just use the antenna I have for now, but try to come up with a way to get it up higher to clear more nearby obstructions. As it is I have a fairly clear view to the south-southeast and am sometimes seeing planes 200 nm or more away in that direction flying at 30-40 thousand feet. I think the lobe pattern in the PCB antenna simulation in the other topic may be inaccurate or I wouldn’t be seeing planes that far away.

One disadvantage of living near an international airport is that most of the airplanes in the area are either landing or taking off so they’re flying at low altitudes, under 5,000 feet in many cases. That doesn’t do much for the range history but it can’t be helped.

I think the lobe pattern in the simulation must be inaccurate or I wouldn’t be seeing planes that far away.

You are right. That was my conclusion also.

Either the simulation is grossly wrong
OR
If Simulation is OK, then the PCB antenna is rubbish

Only the field test will reveal the truth

IF the simulation model is valid, then the radiation pattern is horrible, totally unsuitable for ADS-B, where we need maximum gain in horizontal direction.

There seems to be something wrong in simulation, either the model itself, or the software 4nec2 is not capable to handle such design

If you like, I can try to do a comparison of the PCB antenna vs. a cantenna sometime within the next few weeks, then post the results in the “Which one is the best antenna?” topic. My cantenna is the only other proper ADS-B antenna I have. I don’t have the parts to build a 1/4 wave spider ground plane. I now have a Pi 3 B+ with PiAware 6.1 on it and have claimed it on FlightAware so I would be able to share the starts between the two antennas. Perhaps I could run with each antenna for a week at a time to compensate for days that happen to have a low volume of flights within range to get more accurate data, both antennas placed at the same location and elevation.

If you’d like me to do this, just let me know and also tell me which of the stats you’d want to see screenshots of. I also have VirtualRadarServer which automatically keeps a record of range which I can use to compare with my heywhatsthat possible range using either antenna.

I have the same 12 db antenna that you have mentioned above and have been testing it out for the past several days. Prior to that I had the 6db PCB antenna running and the performance is about the same. This set up I am using I am not sharing the data, just making tests and experiments. My Piaware feeder set up see about 2X more traffic but the antenna is up 10 further than this one and I am using good quality cable and Flightaware’s 1090 base antenna. I did open up both Antennas and tore them apart. I did check the solder, cleaned the solder flashing on the 12 db antenna and soldered the back lugs. These antennas a noted for low quality. I bought it from Banggood usa.

A long time ago I recall someone making one of these PCB antennas. Found a link in my bookmarks but it is dead.

Wayback Machine confirms the link (from 2011):

@idh Wow, interesting. Thank you. Now we know where the Chinese sellers of this antenna obtained the design.

From what I can recall is that the designer of this antenna died, (he sold it privately or via his club). After his death the clone-makers took over.

Even the famous Jetvision A3 antenna is using the same principle:

The original designer said “basée sur le principe de l’antenne colinéaire coaxiale” (based on the principle of the coaxial colinear antenna) and “résultats montrant des performances de l’antenne comparable à ceux de l’antenne colinéaire Coaxiale, ou de la G7RGQ” ((results showing antenna performance similar to those of the collinear Coaxial antenna , or the G7RGQ,) A 4-section co-co has 7.5dBi of gain so this stripline should have about roughly 6 to 7dBi, assuming its electrical behavior is similar to that of a co-co. It’s nice to know the design principle and that it’s a sound one.

As it’s made of flat PCB rather than round coax, wouldn’t it be directional, receiving more messages on the flat surfaces than those hitting the board on its edge? Apparently not, judging by the coverage photos on the designer’s web page, but it seems as though it would be.

Yes, that was my conclusion even without seein the original designer’s rematks.

This PCB antenna is a flattened CoCo.
The two sides of the PCB antenna are two limbs in column 3 of this sketch

The wide strips shield the thin strips, just like the shield of a Coax. The thin strips therefore do not radiate, and just act as connection between wide strip pieces. The actual radiators are wide strips. The top piece of thin strip projecting above pcb is un-shielded and is therefore a radiator

EVOLUTION OF A COCO / HOW A COCO WORKS 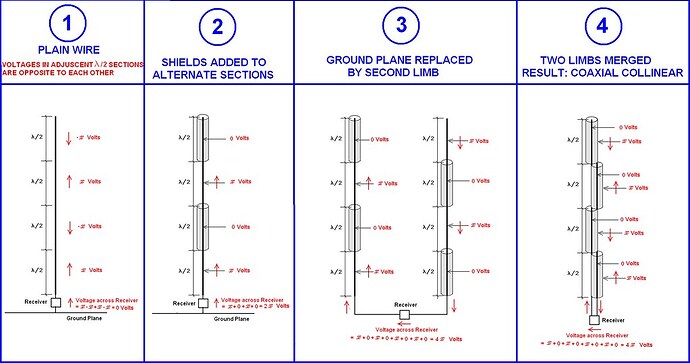 As it’s made of flat PCB rather than round coax, wouldn’t it be directional, receiving more messages on the flat surfaces than those hitting the board on its edge? Apparently not, judging by the coverage photos on the designer’s web page, but it seems as though it would be.

This has been bothering me for a long time, but could not find any logigal explanation as to how this flat strip can perform equal in all directions.