Is there a software package that can analyze the performance of a given antenna? I’ve become somewhat interested in the physics of antenna design, and I see graphs and charts of designs but almost exclusively the “test results” are basically how many airplanes can be tracked and at what range. This is clearly the whole point of flightaware, but are people here aware of anything that looks at the antenna in a more generic fashion – things like the SWR values and the frequency centerpoint “tune” for a given antenna? I’m wondering if there’s a way to optimize an antenna using that method rather than “run it up to the attic, plug in, wait 24 hours, and then hope that by doing all that I didn’t change something else in the setup un-intentionally”

Hey Mate, that’s a good question and I’m sure many have the same. In the end, it will depend on how much you want to spend and how accurate you want the results to be.

As far as i’m concerned, for maybe $30 or so, this is the cheapest method that I know of: http://www.rtl-sdr.com/rtl-sdr-tutorial-measuring-filter-characteristics-and-antenna-vswr-with-an-rtl-sdr-and-noise-source/

Secondly, and for a little more, some have been testing an N1201SA antenna analyzer with decent results ($150-$160): https://www.youtube.com/watch?v=d-fse1jCJ8U

For about $420, one can step into a MiniVna-Tiny, which is a USB driven hobbyist analyzer which may or may not be more accurate, but has seen consistant support for the past 10 or so years with it’s prior models: https://www.youtube.com/watch?v=XMScjLPHC9U

The reflection tests using a noise source and directional coupler (first link) are good enough to get someone in the right direction and it will take much of the guess work out of how’/where a particular antenna resonates.

There are plenty of people much smarter than I am with much more experience here who could probably offer up some other alternatives as well.

that about sums it up Nitr0.

You can use software simulation, but if you cant build things accurately it wont help much.

The question, and Nitr0 answer, sent me away reading and googling.

I stumbled upon this:
RF Detector - SWR Meter US $14.00
Which also lead to this:
SWR meter - Do it yourself project

Also you need a directional coupler for this.

You’ll spend around $60 and the result would be an idea of worse/better without an actual scale of your measurings.

Only need to find a way to generate 1090MHz. Interesting though.

As did your reply. :mrgreen:

For those of you who like to solder - does anyone else think the PCB in that link would make for a fantastic active antenna base? …Slap a BFP760/BFP660 transistor on there, change out the inductor and resistor and would end up with a nice, clean ~20db gain (w/ bias-T). Too bad they are $14/pop + shipping - dealbreaker. Sorry for the de-rail; my wandering mind…

In the “real” world, antennas are simulated (using high-end modeling packages), and then built & tested in anechoic chambers.

For one set of tests, you have a source producing a known signal, with the victim antenna on a turntable, at different ends of the chamber.

Signal source, source antenna, and the spectrum analyzer making the measurements are all carefully calibrated (and cal checked regularly). The characteristics of the chamber are well documented.

You do similar things for FCC Part 15 compliance testing, putting your victim equipment on a wooden table on the turntable, running it and making measurements with a spectrum analyzer (outside the chamber).

Big companies (Apple, Cisco) have their own chambers and test crews. When I was with a wireless company a few years ago, we put in our own chamber, 20 x 20 x 20 feet. Cost for the chamber was around $300k, I think. Another $150k for equipment. And then you need a good crew to run it.

For low-frequency antennas, you can do scale testing in a chamber, or go do range tests. Range tests are more difficult because you need to do testing in an area that isn’t full of signals in the range you’re testing. There used to be some nice spots over in Pescadero along the coast that were well shielded from civilization (and oodles of RF) in Silicon Valley, but eh, the land got developed.

Home-brew range testing gets exciting particularly when you’re using a measurement device that’s wideband. Unless you’ve got a very narrow filter in front of it for just your frequency of interest, your little SDR will act like an integrating device, more or less.

Or, think of making SWR measurements on an antenna, let’s say at 145.23 MHz, with someone transmitting on nearby frequencies close by. Your SWR bridge is a very wideband device, with one detector measuring forward power, and another detector measuring reflected power – which will include any extra energy coming back down the antenna from other sources.

With any analyzer it is necessary to take into account the coax feeding the antenna. The actual antenna feed impedance are modified at the far end of the coax by the characteristic impedance of the coax.

Usually some sort of calibration using a load/open-circuit/short-circuit at the end of the cable should be performed, and then this cable piece can be used as a calibration reference for future measurements using that particular cable.

If a calibration at the far end of the coax cannot be performed, then cut the length of coax to be an exact multiple of 1/2 wave (allowing for the velocity factor of the cable). By doing this whatever impedance is present at one end of the cable should be more or less the same at the other end. 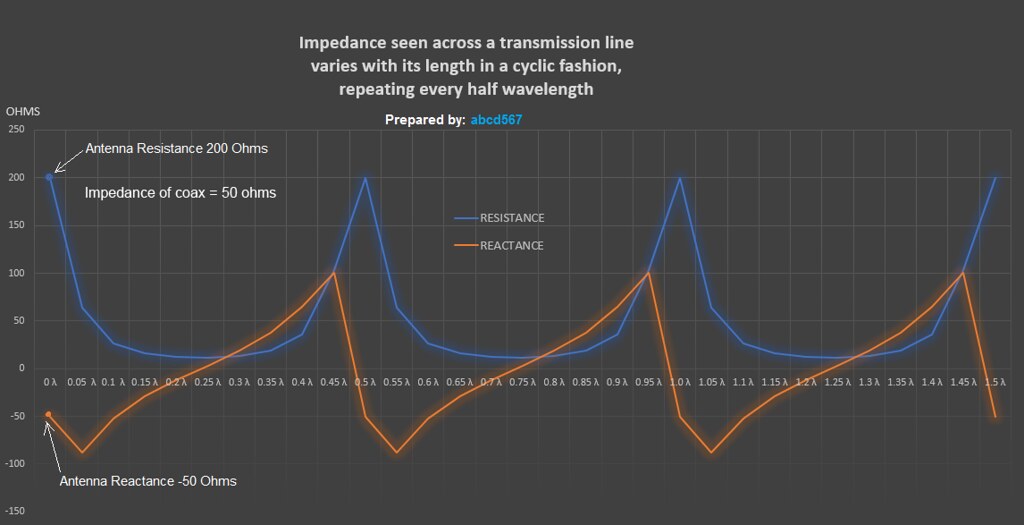 AN EXPERIMENT TO DEMONSTRATE HOW THE MEASURED VALUES ARE AFFECTED BY LENGTH OF COAX BETWEEN ANTENNA ANALYZER AND DEVICE UNDER TEST. 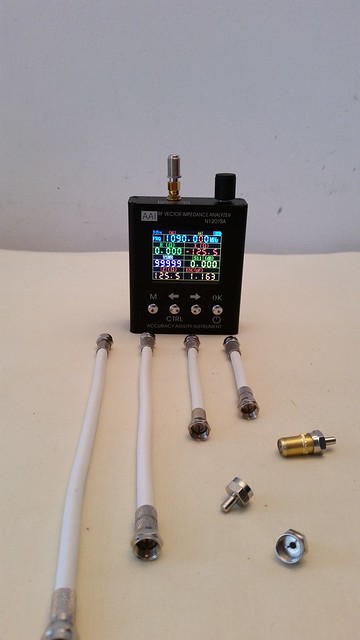 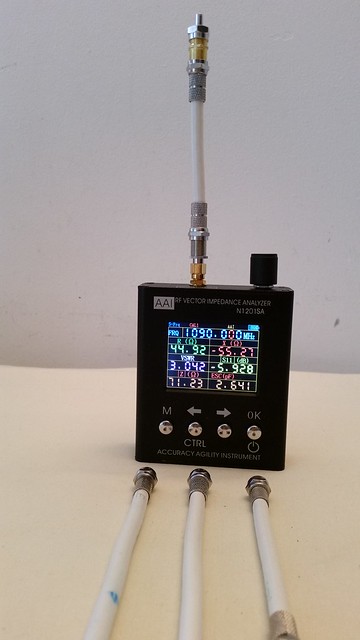 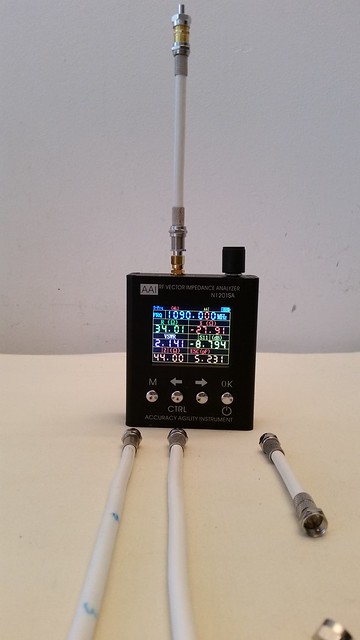 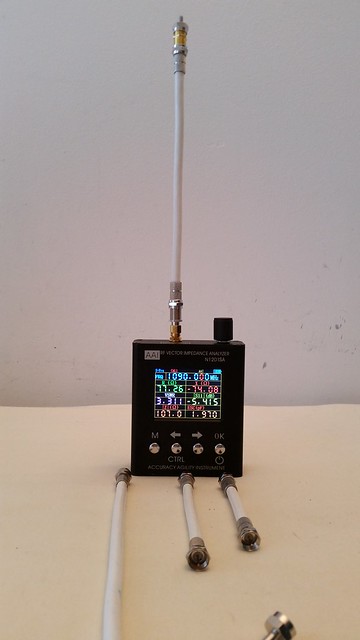 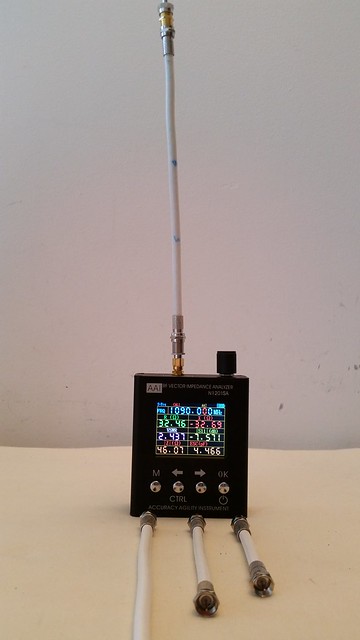 One of the first things I do when making network measurements, after I’ve let the unit warm up for a while, is to calibrate it for the frequency range I’ll be using for tests. With this system and it’s supporting software, that’s easy – press the CAL softkey, then go through calibrate open, calibrate short, and calibrate through, storing the results. I have a set of precision opens, shorts, and 50 Ohm loads for performing and testing calibration.

Once that cal process is completed, I can make measurements.

Fascinating - I’ll freely admit at this point that while I’m learning a ton, it appears that actually doing any of this is probably well past my motivation (time) my dedication (money) and my capabilities (intellect)!

I actually work for Cisco, I do some very high level system design and know an amp from a volt, but my degree is in CS rather than EE and I’ll admit that almost anything that involves a frequency or a greek letter is a little advanced for me. Bob, I’m in the valley a fair bit for work, so at some point I’ll have to buy you a beer and try to get a tiny bit less stupid by osmosis.

@abcd that’s why calibrating the unit is necessary. it accounts for what you are seeing.

Fascinating - I’ll freely admit at this point that while I’m learning a ton, it appears that actually doing any of this is probably well past my motivation (time) my dedication (money) and my capabilities (intellect)!

Don’t get discouraged! Stick with the things on the cheap portion of the list and you’ll be in a spot to where you can tune all day long and still have a good idea of how subtle changes effect the overall performance. It actually makes thing more fun in the end, not to mention what you learn in the process.

@abcd567 - What’s you’re take so far on that N1201SA analyzer? I actually ordered one to dink around with myself since I like the portability aspect and it gives the basics of what’s needed for these setups. Lugging anything bigger onto the roof or whatever is not my idea of fun if wanting a quick sniff. In the end, you get what you pay for when it comes to sensitive equipment, but I can’t argue against the bang for the buck on what those little units offer. No matter what, there is always going to be something better - but is it truly needed… PS are those twist-ons on them cables?! Plz say no…

It is worth it’s price. Does what it is designed for: measures impedance, reflection and VSWR.
Very useful for DIY antenna making. Makes tweaking, trimming, and tuning of antennas very easy.

On the other hand, it cannot measure two very important antenna parameters.
(1) Gain
(2) Radiation Curve
To measure these, very costly equipment PLUS anechoic chamber are required.

… PS are those twist-ons on them cables?! Plz say no… 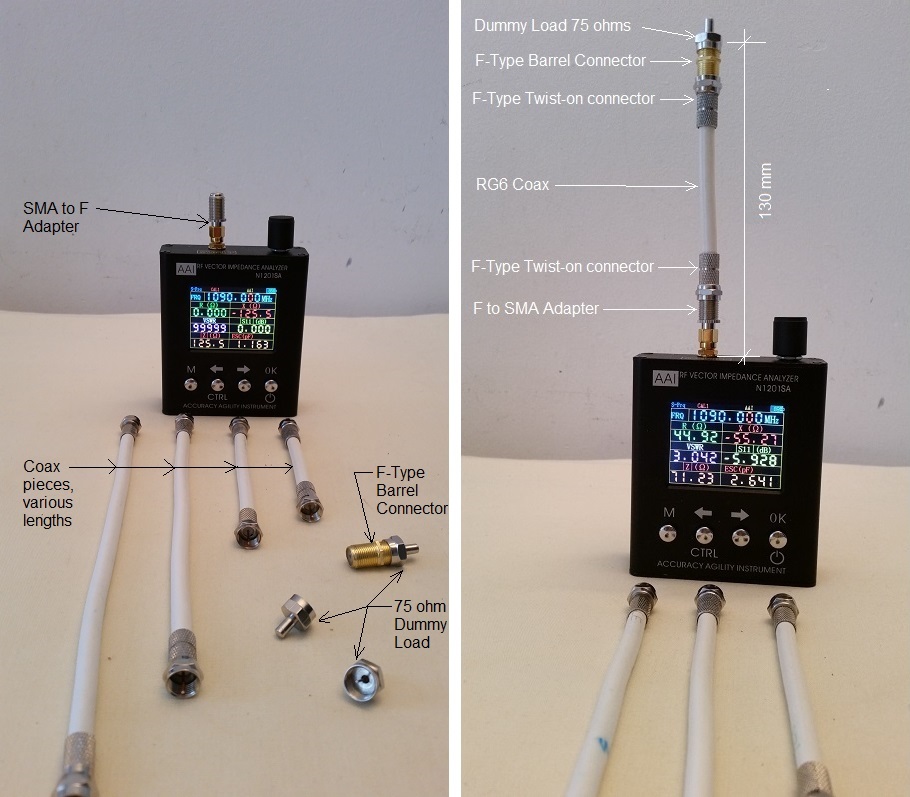 Has anybody tested the omni flightaware or RadarBox antenna to use with a groundplane or spider arms at the bottom?