If anyone is after such a cable, I got it from Amazon (link below) - I didn’t think it would be easy to find such a cable with the correct connectors installed, but here it is: 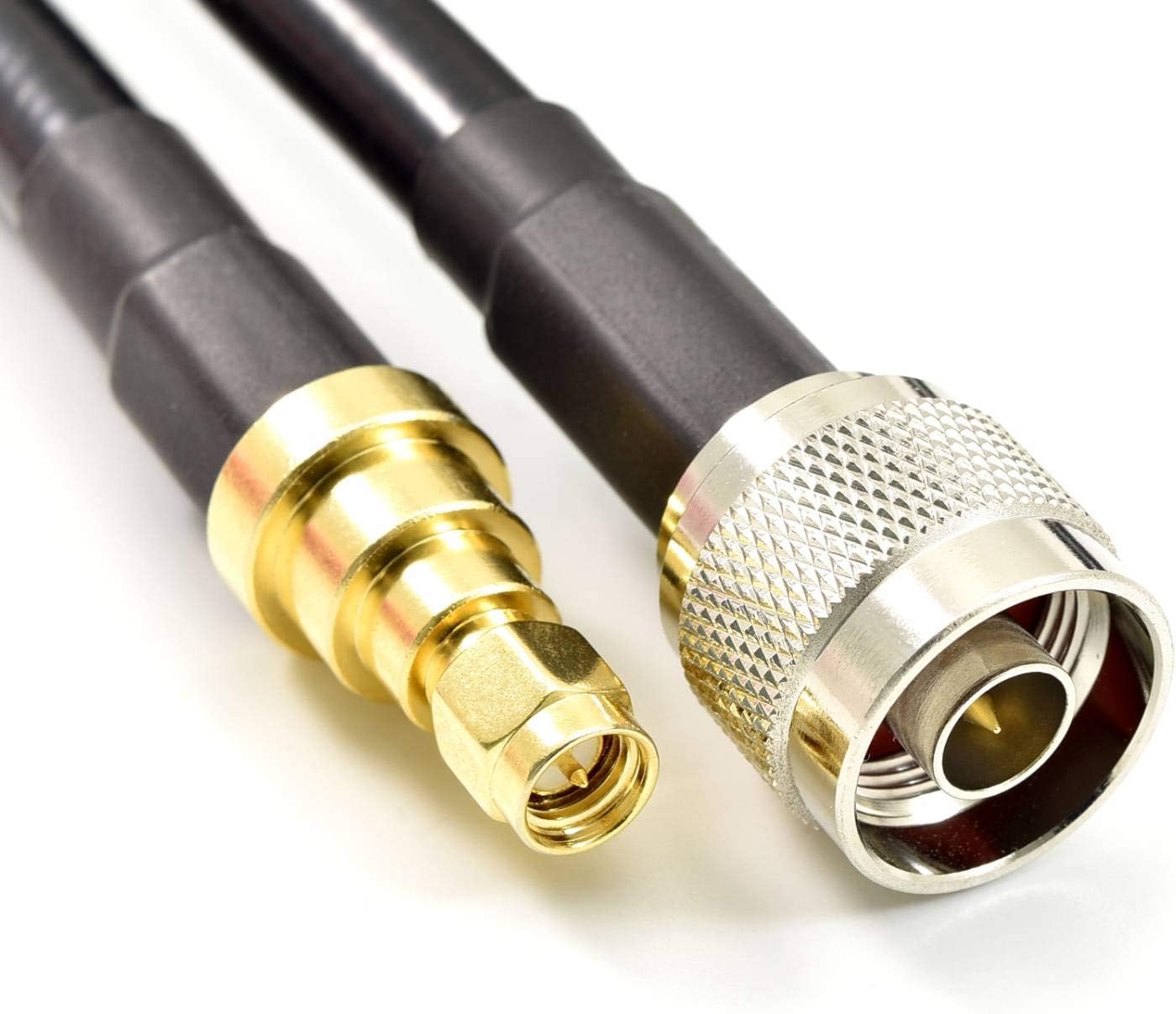 That looks like a good price. I have a story to tell though. The tl;dr is be careful when you move or bend that cable, especially near the ends.

About a year and a half ago I bought two 15M/50 foot LMR-400 cables. One cable was the official MPD-Digital LMR-400 cable, the other sold as Proxicast LMR-400 equivalent for maybe a 40% lower price. Over time and changes, the MPD cable became attached to my UAT-978MHz antenna, and the Proxicast attached to the ADS-B 1090MHz antenna which was not how I had it originally. Well, about 10 days ago, a week after some recent RPI to CM4 changes, I noticed my 1090MHz signal strength and range was slowly decreasing each day.

My test/backup station is offline, so I have spare parts for everything except the 15 meter antenna cable. To troubleshoot this decreasing signal, I one by one swapped out components from my station, including, changing from POE to power adapter, CM4 back to RPI4, Airspy R2 to Mini, one LNA to the other, swapped pigtails, swapped lightning arresters, all the way up to finally swapping the antenna. Nothing fixed the problem. The funny thing was, almost every time I made a change the signal would reduce slightly more. I was probably down to 50% of range and messages. I lost my year-long first place status in the nearby FA rankings.

You can guess what this week of troubleshooting resulted in finding… the cheaper Proxicast LMR-400 copycat cable partially failed from ever so slight bending in 10 cm location adjustments recently. It would get worse each time I touched it. Once I narrowed it down to that with certainty, I didn’t feel like lowering my 30+ foot antenna mast again to move the good cable to my 1090MHz antenna. (I ordered a new MPD replacement cable after doing my best to check and fix the Proxicast cable connectors and stuff). Meanwhile while waiting for the new cable, I just connected my Airspy/1090MHz LNA/receiver to the MPD cable connected to the 978MHz antenna which brings 1090 MHz signal strength back to near normal, but with a 978 MHz antenna, messages are down maybe 10% and avg max range suffers by about 10 nmi. On the bad cable with the FA 1090MHz antenna, my UAT performance is way down but still kinda half-working.

My new MPD cable should arrive late tomorrow if all goes well! Just be gentle with the discount LMR-400 cable and it will probably serve you well!

Thanks for the advice David

That does sound like a strange fault - hopefully your new cable will sort it out.
Could be a faulty conductor or slight damage in the single core maybe.
Given the fault is close to the connector, that could well be the problem, with such rigid cable.

I’m used to working with cables and connectors of all sizes in the professional audio industry, from 64amp mains supply right down to tiny 7/0.2 and smaller wire on circuit boards.

Problems in cables are notoriously hard to locate, as you obviously can’t see inside and they tend to be very intermittent.

I will, of course, be very careful not to bend and damage anything and run everything as straight as possible - I only need one bend and that will be done over a couple of metres, so very gradual.

I’m installing it all on Wednesday, along with my new Jetvision A3 and 3m pole, so I’ll let you know how I get on.

Let me know if your new cable fixes your troubles

one suggestion is unless you plan a fairly rigid installation, add a short pig-tail between the LMR400 and your receiver. Heavy cable like that can put a lot of strain on either the SMA connector or the USB.
(given your comments above, I doubt this would have gone unnoticed!)

I hadn’t thought that far ahead

I’m used to working with cables and connectors of all sizes in the professional audio industry, from 64amp mains supply right down to tiny 7/0.2 and smaller wire on circuit boards

You’re already better off than me in any cable scenario

My problem is most likely at the connector, or perhaps down about 50 cm where the more significant bend from ground to up along the wall is. Finger futzing with connector and straightening the cable lower down didn’t show up in signal strength changes however.

I think what I will do is look for a new SMA male connector for these cables, and cut the cable below my previous bend point. I’ve done some of that before on smaller cables. If I can recover it I will then have a much longer secondary cable for my test station and other radio adventures.

In the photo the MPD cable is on the top/left. The Proxicast cable below it used to follow the same slight curve near the end and terminated just below the MPD. I probably never bent the end much more than that. It’s possible I wasn’t very gentle when I first setup the cables though.

There are lightning arrestors with N connectors, that’s likely what you want only changing to SMA when necessary.
N connectors are better suited to LMR400

Good idea - if you know roughly where the problem lies and the cable is faulty anyhow, then well worth a try

If you have a multi-meter, you can always measure the resistance, from end to end, and ‘waggle’ (very technical term that) the cable to see if that value jumps around or not. That may give you more of a clue to where the problem is or if you’ve solved it.

I actually have two N connector lightning arrestors from being confused when I first ordered cables and connectors about 1.5 years ago. I think these are N female on both ends. I’d still need to get to SMA on the other side though which would add a connection to the chain, right? Or maybe I just need an N male to SMA male pigtail.

I will try the multimeter once I get the cable fully down and replaced.

If you have a multi-meter, you can always measure the resistance, from end to end, and ‘waggle’ (very technical term that) the cable to see if that value jumps around or not.

My new cable arrived 24 hours ago and all appears well with it! Instant back to normal, possibly even increased positions.

Well today I dug out my multimeter and watched a couple youtube videos on how to measure resistance. The plot thickens…

Testing this problem cable, I found no short (center pin <–> shield). Any trace of connectivity and continuity alarm only where I’d expect it. The outer shield eventually settles to 50 ohm with 60/70 ohm waggle I’m guessing because I can’t keep my fingers still. The center pins settle to about 30 ohm with occasional 40 ohm, maybe due to the small contact area?

The results are mostly similar with my known good other shorter 10 meter cable from my previous test station. Perhaps more solid 50 ohm resistance on the shield. So I guess I have an excuse to bring my test station back to life and test this Proxicast cable again, but with the antenna in an easy to access location so I can figure out where the problem is.

Before replacing this cable, I literally swapped out every other component in the chain, I cleaned cable connectors with cotton swabs etc. So I find it hard to believe this cable is fully functional!

The result should be either open (>10 megaohms) or a short (<1 ohm), 30 or 50 ohms is only plausible if you have a cable with a length of a couple of miles! What do you measure with the 2 probes against each other?

Ok, then I was misinterpreting what my multimeter was reading.

For measurements, the Ω - 200 setting in the multimeter image below resulted in readings settling to 0.05-ish, which I guess I was mistranslating to 50 Ohm!

None the less, the readings between both cables were pretty similar. Shield to shield settles to about 0.05 with a bit of waggle, and pin to pin about 0.03. All 0L between pins and shields so no short seen. Any other suggestions to do it more correctly with this multimeter?

For measurements, the Ω - 200 setting in the multimeter image below resulted in readings settling to 0.05-ish, which I guess I was mistranslating to 50 Ohm!

That 50 ohm cannot be measured with that DC ohm-meter because it is actually AC impedance.
In DC it will show infinity between center and shield.

0.05Ω is (accurately) below the capability of a cheapish multimeter. Fortunately it doesn’t matter - this is close enough to zero for our purpose and shows there is definitely no break in the cable. Similarly, anything above a million ohms can be taken the be an open circuit (pin to shield) giving a ‘pass’ to the test. The problem with digital meters is people mistake them for being accurate beyond their capabilities. (don’t misunderstand me, I still think everyone should own one).

Hopefully it will give you some indication, but if it’s slight it will be quite hard to tell - you have a lot more chance if you’re looking for a short or open circuit.
If you suspect the area of the problem, you could cut the cable well before the suspect area.

Have you thoroughly inspected the connectors? The problem is far more likely to be in there and may just seem like it’s in the cable… maybe?

But don’t worry, it’s always very hard to fault find a cable, so you may just need to cut your losses (pun very much intended) and chop the suspect area out and hope for the best in reality

I’ve bought this one today to use with my Vinnant antenna that is enroute.

It’s red but there are ways to camouflage that

5 meters might have done the trick as well but then the reciever would have to be in plain sight and now it can stay hidden.
The antenna will be mounted outside on the balcony, the reciever will remain inside.

You might find you get quite high signal loss with RG58 coax. It’s not really intended for long runs at high frequency.