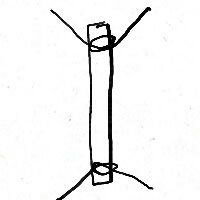 Great prices on your favourite Office brands plus free delivery and returns on eligible orders. 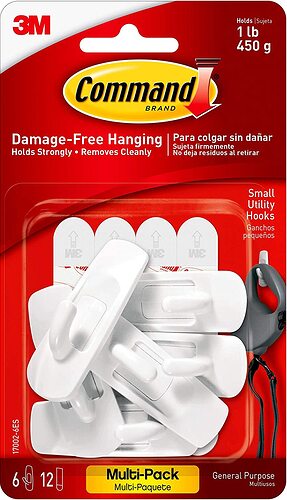 The coaxial feed line can be grounded on the outer (shield) for electrical safety.

That’s my point. That shield is “grounded” nowhere. It is isolated by the switched mode power supply transformer that feeds the Pi and the receiver.
There is no “ground” on the shield, unless you put one.

There is no “ground” on the shield, unless you put one.

Not needed for totally indoor installations like mine … the antenna, the coax, the radio (dongle), the computer (RPi) are all indoors

This is the range I am currently getting, for maximum height range and under 10,000 feet. This is using my 1/2 wave antenna as I showed either on this thread or another. A basic telescopic magmount that I shrank and lopped a bit off the end. Indoors. Not too shabby for range though? I have high hopes for a professional antenna like the 26 inch FA one. 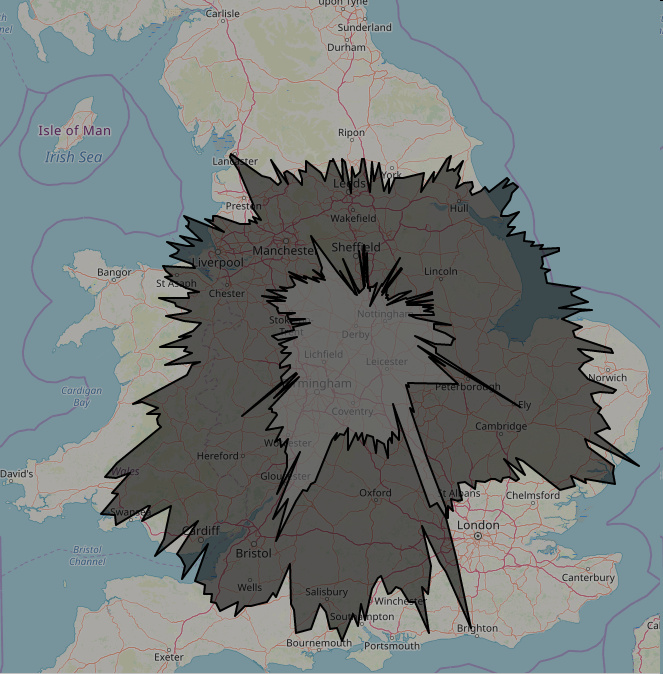 Your range looks pretty good.
Not quite sure what site the map you posted came from but for some sort of comparison, this is the coverage I get with the FA antenna you have ordered, from another site.
I’m pretty sure the FA antenna will let you see the approach and departure traffic from Heathrow and Gatwick that are coming to and from the south and east, which should dramatically increase the number of aircraft you see.
I am just a little north of Portsmouth. 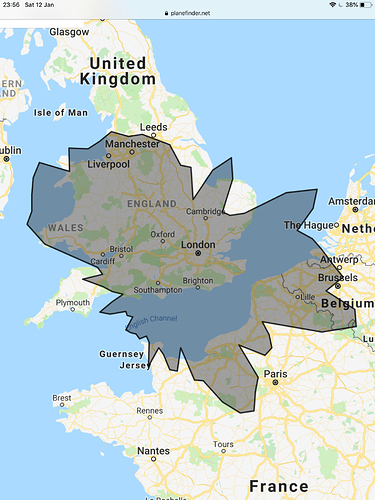 image1536×2048 746 KB
Usual caveats apply, I am quite high up (60m asl) for the local area and I needed to add extra filtering to stop strong mobile phone signals overloading things.
The antenna is currently inside the loft and the reduced range to the south west and to a lesser extent to the north east is caused by the number of brick walls in the way. 1 wall to the north east and about 5 walls to the south west. NW and SE just look through the roof tiles to the horizon.
Really will have to try and get it outside sometime.
ittechtal January 13, 2019, 1:11am #46

I knew I had seen that sort of map somewhere before.
I must have downloaded it myself at some point but it must be buried somewhere in the archive.

Well I can say that for me, the built in web interface of FA would not entice me to spend all this money in setting this system up. I like all the additional information and formatting that VRS offers when I set it up to get the details from my Piaware. The downside is I need to leave my PC on (which I do any way) in order for it to gather the data from the pi. But VRS just is so nice with how it can format things and present all the nice information in English, rather than only having codes and things. I do not know what you use to view the data but I find the built in Skyview or what ever it’s called woefully lacking.

I did mine using the OL3 html replacement. 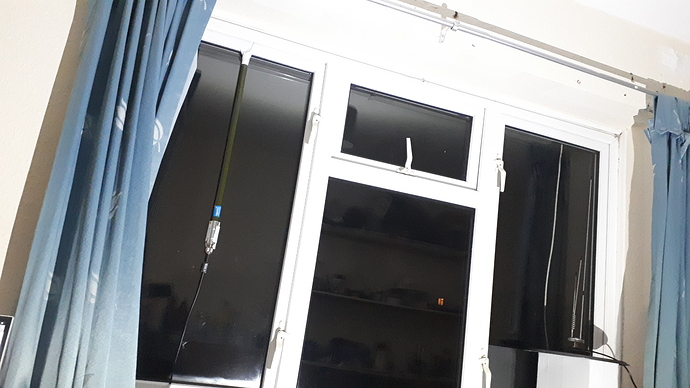 This is what it looks like installed. It’s early to tell properly but I think it is only boosting my range by a small bit. But might it yield more hits in the same range, perhaps?

I think it is only boosting my range by a small bit. But might it yield more hits in the same range, perhaps?

May be you have strong mobile/cellular signal at your location. These strong signals overload the dongle and adsb signals which are weaker are not processed. You can determine the presence and strength of these mobile signals by method given here:

Do I Need A Filter?

Thank you. I am using my regular high quality NESDR Smartee on the PC to use the GUI version to see this. Although you should know that I use the FlightAware Pro Stick Plus which has a filter built in and I have seen the waterfall and db meter on my PC using SDRSharp and it looked pretty great, acceptable (I think) levels of ambient low levels of noise with bright coloured strong signals pulsing over. But I am very interested how this scan will look any way. Thanks.

Yes abcd567 is aware of the filter in the pro stick plus. Yet he had the problems with exactly that stick.

But that dongle also has an internal amplifier before the SAW filter, so it is possible for the amplifier to be saturated by some TV signal, maybe some strong LTE pulses.
It’s hard to tell what the problem is and if there is one in these cases.
Therefore it’s mostly trying a filter and checking if it improves reception.

There is the FA filter but it’s pretty pricey in Europe and i’m not sure i would buy it again.
I changed to a rtl-sdr blog LNA + v3 dongle setup but that’s a rather hefty pricepoint if you need to buy both. (and you basically need the dongle because the LNA needs voltage on the coax, called bias-t)
There are also 1090 MHz SAW filter available on ebay shipped from hong kong, if i had to buy a filter now i would probably try one of those as they are rather cheap.

As your reception towards the east isn’t that good anyway i would try a different position for the antenna, maybe hanging it as high as possible 5 cm distance from your southern wall or some other spot completely disregarding the window.

You checked heywhatsthat.com right?
It seems your range to the southwest has somewhat improved, maybe in the other directions there are just too many houses or other stuff in the way.
If that is the case no amount of equipment will improve your reception in those directions.

I did check that site. Although my antenna is still indoors, as shown, it is somewhat similar in range. But it is not had enough time to fully fully saturate to full accuracy. I did reset the ranges on VRS after installing the new FA antenna in it’s final location. But this is what it currently looks like: 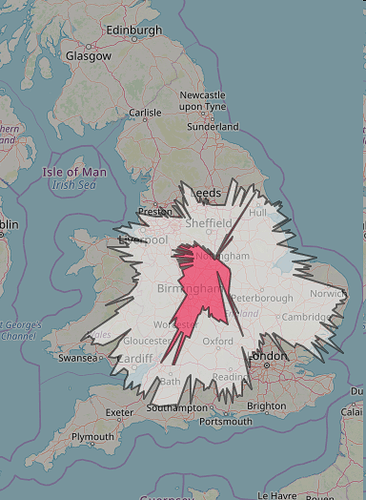 This is only on the ADS-B receiver (I have the additional port for MLAT which seems to extend range past normal due to the whole 3 minutes freebe of tracking I think) It shows the full any-altitudes-count white with the lowest < 10,000 feet in red.

I did check that site. Although my antenna is still indoors, as shown, it is somewhat similar in range. But it is not fully saturated. I did reset the ranges on VRS after installing the new FA antenna in it’s final location. But this is what it currently looks like:

If you are close to your theoretical range, that’s great for an indoor antenna. Especially because the website does not take other houses into account that could be in the way.

You might also consider lowering the gain to 48 or maybe 44 with your setup if you are still using -10 at the moment.

I did mess with the altitudes. I am under the recommended, but I think they are measuring it by outdoor antenna height, not indoor. I think I am probably about as good as I can get I think while not having it mounted outside. Outside for me is truly out of the question. I am going to put the FA dongle in my PC and run that test again, although I will have a look in SDR sharp to see how it looks again, since I have not since the new antenna. Come midnight I want to let the pie have a good full day tracking planes uninterrupted to see how many hits and planes I get during the day and of course smooth out and fill out the range plotting in VRS.

This is the FA blue dongle. Do you really think I need to manually lower piaware’s gain?? Surely that would be detrimental since it’s nowhere near peaking at high db and the noise does not appear (to my unknowledgeable mind) high or anything?

This is the FA blue dongle. Do you really think I need to manually lower piaware’s gain?? Surely that would be detrimental since it’s nowhere near peaking at high db and the noise does not appear (to my unknowledgeable mind) high or anything?

ADS-B is not a continuous transmission, so the meter your are using is not representative.
Also the screenshot is not using tuner AGC (gain -10, which is somewhere around 55 so higher than the maximum manual gain).

You can also just run the command provided in the thread in post 2, if the number is rather high then it’s a good indication that you are losing at least some messages due to them being too strong.
The command uses the internal dump1090 statistic, so it is reset on restart of dump1090 or the pi.

I see. Well when I put on the RTL AGC on, it went bazerk. I lowered it a bit but I have no idea how that works, if it’s (clearly is…) going higher than the max I can slide on SDR#, does me dropping it to 38 mean I should tell piaware to be 38? It makes no sense to me since the numbers remain the same unless my memory is bad. So I have just taken your advice and set it to 44 and rebooted dump1090.

What do you think the benefit of dropping away from -10 auto control will mean in terms of performance and what’s the drawbacks of -10?

What do you think the benefit of dropping away from -10 auto control will mean in terms of performance and what’s the drawbacks of -10?

It depends. Think of -10 like 55, not something automatic. Lower gain could reduce range, but not necessarily, depends on the noise.
Low, close flying airplanes or with very high gain high flying, maybe 20-30 nmi distant airplanes might have a signal that is too strong to detect, so you basically lose some planes at some point.
So you could for example reduce gain until you start losing range and then go back up a bit

Anyway read my two posts in that thread for some explanation. Like the filters, some trial and error is involved that can’t replace understanding.