Hi
my location is very close to user m1geo, if possible could he/she could let me know their configuration and their altitude. I am running a blue dongle and pi zero with a 3m coax to a simple 8 legged franklin spider at about 7m altitude. The most I can get rangewise seems to be around 185nm.
I have tried a whole bunch of things but seem to have peaked my logging, it would be useful to have an idea of the system differences to see if I could ramp up my range

The zero isn’t optimal as the voltage supplied to the SDR will be borderline.
If you have a powered USB hub you can try connecting the SDR via that.

Those can differ massively for people relatively close to each other (it’s kinda obvious if you think about it, 1090 MHz doesn’t care about clouds / fog, but a couple trees or a single house and even stronger signals will have issues going through).
For all intents and purpose it’s line of sight.

its very flat here and maybe they are also running a pi zero, thats the reason i would like them to let me know what they are running!

If line of sight isn’t the issue you might benefit from a filter, a better antenna or better coax.
Usual candidates.

I know m1geo so I’ve messaged him via another platform to draw his attention to this thread.

I have a homemade colinear totaling about a metre in length made inside a 20mm diameter fibreglass tube on the roofline of my bungalow. Antenna tuned on VNA. There’s about a foot of RG58 to the receiver inside a weatherproof box mounted below the antenna (and below the roofline) which contains the FlightAware RTLSDR Dongle. That’s on a Pi 3 with a PoE HAT and it’s fed with outdoor grade ethernet cable, clipped to the side of the house.

I have a similar setup for APRS.

Hi George
thanks for the rapid response and Keith for finding you,I am in watebeach so almost below sea level.
Did you use any particular design for the colinear?, I have had mixed results.
I have an amp to try next. Then an old pi3 I liberated from a traccar project, as the pi zero is running about 85% processor time.
Rgds
Chris

Just stacked quarter-waves, and coiled (hairpin and then wrap) the anti-phase sections, effectively making a stack of 1/2 wave antennas, fed by a 1/4 wave. Similar to, but not exactly like those mentioned on this thread.

If you don’t fancy making your own, then I have found this PiHut 66cm ADS-B antenna to work well.

@christophereldred - thanks for reporting my IP address to my ISP after I explained to you in an email what was going on. Makes me really glad I helped.

thanks for reporting my IP address to my ISP

Wow, that was a nice thing to do

thanks for reporting my IP address to my ISP after I explained to you in an email what was going on. Makes me really glad I helped.

What? If that’s indeed true (don’t know the situation), it is borderline insane…

Yup. That’s exactly what happened. The machine that hosts my website also has a myriad of other things running on it - I get my money’s worth. Christopher’s UniFi router showed a TOR node for some reason. Odd given I don’t run an entry/exit node.

For some reason Chris then reported me to my ISP (who fortunately is technical and understood things). All this despite the fact the connection to my server showed as port 443 (which is standard secure HTTP).

Anywho. All fixed now, even if it did waste a few hours of me checking log files. Not bad for my first forum post! 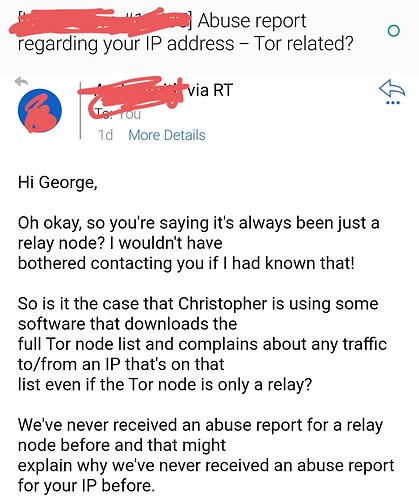 Some ISP, in their TOS, don’t want any servers running on your personal internet connection, they want to upgrade you to “commercial” for that.
Some don’t care.
To report a TOR relay node… even for “big brother” mentality that I see in UK is a bit too much.

I always thought that tor middle relays were totally anonymous,

Exit nodes can be sniffed. Maybe he has one? Regardless… why would that be something one chooses to report?
Is Tor Really Anonymous and Secure? (howtogeek.com)

Actually, considering that the whole country got out at windows to cheer the nurses going to “COVID” work and shamed the people that didn’t do it… it’s a different mentality I guess.

What’s wrong with some people?

We would call it some “Blockwart” mentality

Exit nodes can be sniffed. Maybe he has one? Regardless… why would that be something one chooses to report?

Because people look at reports of fancy Unify routers and pihole and they don’t understand it and still go berzerk.
I’m sure mister C gave mister M a dyndns URL for his local interface.
M visited it, Cs router produced a warning … access from a TOR node.
C then proceded to report it because he had clearly been attacked.

My guess would be he didn’t even know it was mist Ms IP.

@m1geo let me guess you’re on a bit of a hill or similar.
Still pretty certain the main difference between the stations can be explained using the panorama tool i linked.
Comparing stations even ones that are close by is very often a red herring as the horizon will look way different most of the time.

C then proceded to report it because he had clearly been attacked.

Again, a culture difference probably. Nobody would report that here to the ISP. Would be like “Meh, another Chinese/Russian guy, who cares”.

Firstly, what I chose to run on my server is between me and my ISP. My ISP (as you see from the email printscreen) are fine with my actions (they even allow exit nodes [but they must be on their own IP]). I am not running an exit node, just a relay. I have never run an exit node. In honesty, I have little interest in running the node at all, but a journalist friend who works in some interesting places is always pushing for folks to help expand the network - my involvement is just a response to that.

Secondly, I can assure you that I never hacked anyone. I simply haven’t got the time (or the skills). I only signed into the forum because Keith pointed out that someone was asking for help and directly referencing me. Definitely beginning to wish I’d just put the reply off until one-day-never.

Thirdly, and most frustratingly, I explained in an email what was going on 2 days before my ISP got involved. I never received a reply asking for further details, logs, etc., and so I didn’t think any more of it.

Probably we can just drop this now! Mr C has some information on the antennas and the setup, and nothing has changed for me besides a bit of lost time. Mistakes happen. No hard feelings.

Back to the ADS-B stuff: I’m not overly on a hill. It’s very flat around here - Cambridgeshire UK - and I have the antenna in the clear. It’s a homemade antenna which I tuned in situ using a Keysight VNA. I’m an RF Engineer and have a PhD in wireless communications/networks, as well as lots of practical experience as a ham-radio operator. I’ve a good understanding of working at 1GHz and how RF behaves at such frequencies. My day job has me working at 26 GHz with very big FPGA systems.

My range thoughts: The only thing I would suggest that is a big difference is that Mr C has a lot of lossy coax between his antenna and receiver. This coax loss adds directly to the receiver noise figure. This will kill the receive range performance and is easily addressed. If using thin coax like RG174 (3m is around 5dB loss). Using 30cm of RG58 as I am is around 0.15dB loss. 5dB loss is significant since it is a log scale, and is becoming close to losing 3/4 of your signal strength, meaning only the very strong signals at the antenna will remain strong enough to decode by the receiver & software. Minimise any loss between the antenna and receiver. If you must have a long coax run, have an active (powered) preamplifier (to overcome the coax loss) directly at the antenna.