Aircraft N2871R filed a flight plan for a 9:30am departure from airport A to B. plane was actually at airport C and was flown 10 miles from C to A at 9:00am. FlightAware picked up the tail number at 9:00 and assumed that the aircraft was on the filed flight plan from A to B. The track log shows the altitude and speed for the landing at A, but now shows an estimated track from A towards B along the filed flight plan, even though the plane is stopped on the ground at A waiting for passengers.

no plight plan was filed for the flight from C to A, so why did FA pick up the flight and match it to the filed flight plan? 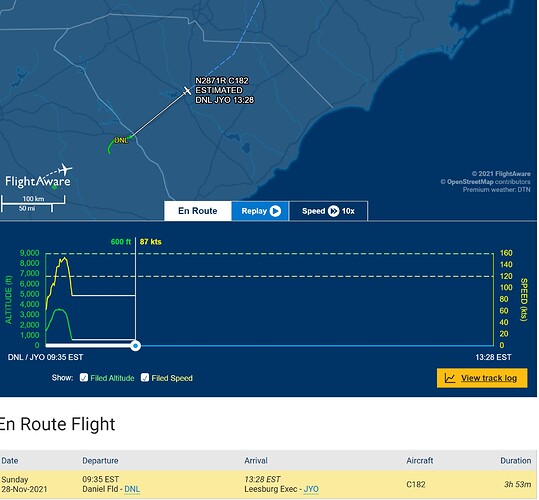 I haven’t looked in detail, but from your description it sounds like we saw:

If you did file for C->A, that can actually mitigate this sort of thing because then we have extra data to know that “in the air near A” is ambiguous and might be one of two different flights.

In my example, C is 65J, A is KDNL, and B is KJYO. Flight plan was from A to B. Plane left C to reposition at A, but FA interpreted that as the start of the flight from A to B.

The question is, why didn’t FA perform as it usually does and simply log the C-to-A flight as a position-only flight that occurred prior to the one with a flight plan from A to B.

As I said, because it saw the aircraft in the air near A, with a plan for A->B, near the departure time for the A->B leg. To hyperfeed, in the absence of more information, that looks like an early departure of the A->B flight.

So, you’re saying this is a feature, not a bug?

On reflection, I guess there is no way to know, in real time, what is going on. In this case the last report before landing at KDNL showed the aircraft had descended to 600’ going 87 kts and was headed straight for KDNL. If I received no more position reports for over 5 minutes, I’d assume the aircraft had landed rather than being en route along it’s filed flight plan.
It would be a shame if the aircraft crashed shortly after takeoff and FA kept showing the aircraft on an estimated track merrily flying on.

Yes, it is a limitation because we don’t have enough data to be sure about exactly what is going on. We develop rules that try to work for all flights in the face of limited or outright incorrect data (it happens) and while we do try to continuously improve those rules, it’s not quite as simple as saying “obviously this flight is landing at A”.

If we did have info about the C->A leg, that helps hyperfeed make the right decision.

It would be a shame if the aircraft crashed shortly after takeoff and FA kept showing the aircraft on an estimated track merrily flying on.