Does anyone recognise this aviation patch ?

I have had a patch in my collection for around 35 years and I have no idea what it represents. I know it is a US one but that is it !

It has on it a fairly beaten-up old pelican flying right to left. He is smoking a cigar. He has sticky plaster crosses on his beak and his body. He has a bandage on his head and left foot. He is towing a white wind-sock held by his right foot. The wind-sock has a red sewn patch on it and the pelican has a brown one sewn to his chest. There is also what looks like a red light on his chest and one on top of the bandage on his head. There is a shell coming upwards just in front of him and four round projectiles just above him Roughly between 1 and 2 o’clock at the edge of this basically round patch there is a small bit of shaft and the flights of an arrow.

Looks like this old boy has been through the wars !! Any ideas ?

Look here to see if one of these patches is the one you have.

Also try this site in case it is the 14th Airlift Squadron: c141flyingsquadrons.com/14th

Thanks fpr that rw812 but no, it’s not any of these

Thanks fpr that rw812 but no, it’s not any of these

Can you take a pic of it and post.
I work next to a Military Museum and may spot something.

Thanks to both of you for your suggestions. I am partially sighted and so have some problems navigating around some of these sites. I have taken a pic of the patch but cannot see how to post on this site. Is it possible? Cheers Peter

What you need to do is upload it to the web (Flickr, a personal account, etc). Make sure the file name ends in jpg or another graphic extension. Then you link it to the posting by using the tag.

I’m sending you a private message with my email address in case you would like to send the picture to me for uploading to the Internet. 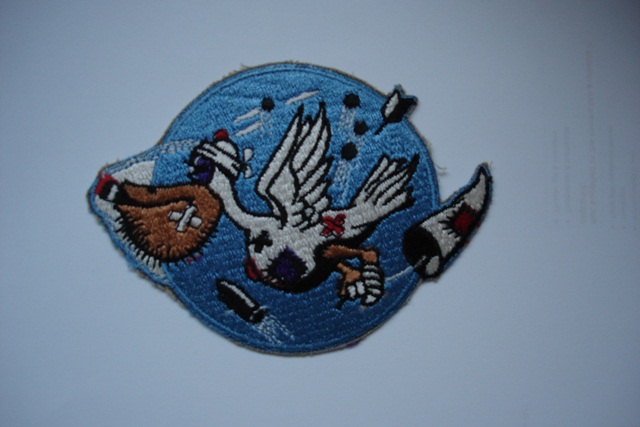 After seeing the photo it only reinforces my initial thought based on the description that it represents a target towing unit.

Whose target towing unit is going to be difficult to answer unless someone recognizes the patch.

We have a winner, thanks to JHEM.

The patch is from the 23rd Tow Target Squadron.
http://www.ranger95.com/airforce/tow_target_sq/images/23rd_tts_ww2.gif
Another version of this patch and patches of other tow target squadrons available here

During WWII the tow squadrons were formed from every possible pilot source to prevent draining combat ready pilots from their duties. Some squadrons were made up of active duty USAAF personnel and others were composed entirely of WASP pilots or CAP pilots.

Being a tow squadron pilot in the US during WWII was an infamously renowned job for the risk of being shot down by friendly fire, often ground based anti-aircraft (AA) fire from training batteries manned by civilians.

In 1994 A Lear 35A tug was accidentally shot down by a Tawainese ship during a live-fire training exercise. Anyway this topic raised a question that maybe some of you current guys could answer. When I flew corporate, it seems like there was a company in north Georgia that flew Lear tugs over the gulf for Eglin AFB. Is that right?

it seems like there was a company in north Georgia that flew Lear tugs over the gulf for Eglin AFB. Is that right?

Phoenix Air. They do just about anything and everything in terms of military services. Aggressor aircraft, target towing, E&E, etc…

Yep, thats them. Thanks

Many thanks to everyone who has responded to this topic and identified the poor old pelican. Especially rw812 who uploaded the pic onto the website for me. Next time I come to the US the drinks are on me !!
Cheers Peter
i

It was my pleasure to be able to help.

Additional information: The patch is somewhat rare, according a listing on eBay.
militariawwii.com/army-air-force … -from-wwii (the auction for this has ended)

Yes, I recognize the patch. It is the 23rd Tow Target Squadron. My dad was crew chief during WWII. They were based at Howard Field in Panama. They towed targets for gunnery practice.