Well… another round of failures.

What this means? Nothing, made another 6-elements coco, carefully measured (113mm) and guess what? Half the range of a Slim Jim

DC continuity carefully tested on each segment and after full assembly Looks to me like you have a great build so I don’t understand why you are getting bad results.

When you say you check continuity you should get continuity alternating Braid, Core, Braid, Core etc. Is this what you are seeing?

I’m really tired of making CoCos with those cables… maybe I’ll source some RG213 cables to try with a .66 VF (didn’t find it in my city).

In the meanwhile I’m trying some J-Pole/Collinear J-Pole to try something different. The the Slim Jim gave me pretty good results (for it’s size/complexity), going to try some more complex ones now.

Fairly good converage up to 100nm

Since you are the NEC’s guru, would you mind simulating the antenna below on it? If possible with 3 radiating elements as well?

I made the matching coil with 16 turns of AWG 16 copper wire. Inner diammeter is 5mm and height is 53mm.

After making about one dozen FAILED “Coaxial Collinear” (Coco) antennas, I decided to make “Wire Collinear” (vertical wire sections with interposing stubs and/or coils). I tried over a dozen designs, and all performed much less than a 1/4 wavelength ground plane (Spider/Cantenna).

Here is a photo of some of these Wire Collinears, which I found in my scrap parts drawers. There were many more, but have been digested by trash bin. The top 7 are only whip part, which were soldered to a SO239 connector with radials. The next two are variants of J-Pole, and last 2 at bottom are Zeppelin, the original antenna used in German Zeppelin air ship (1895), and Slim Jim was derived from it. 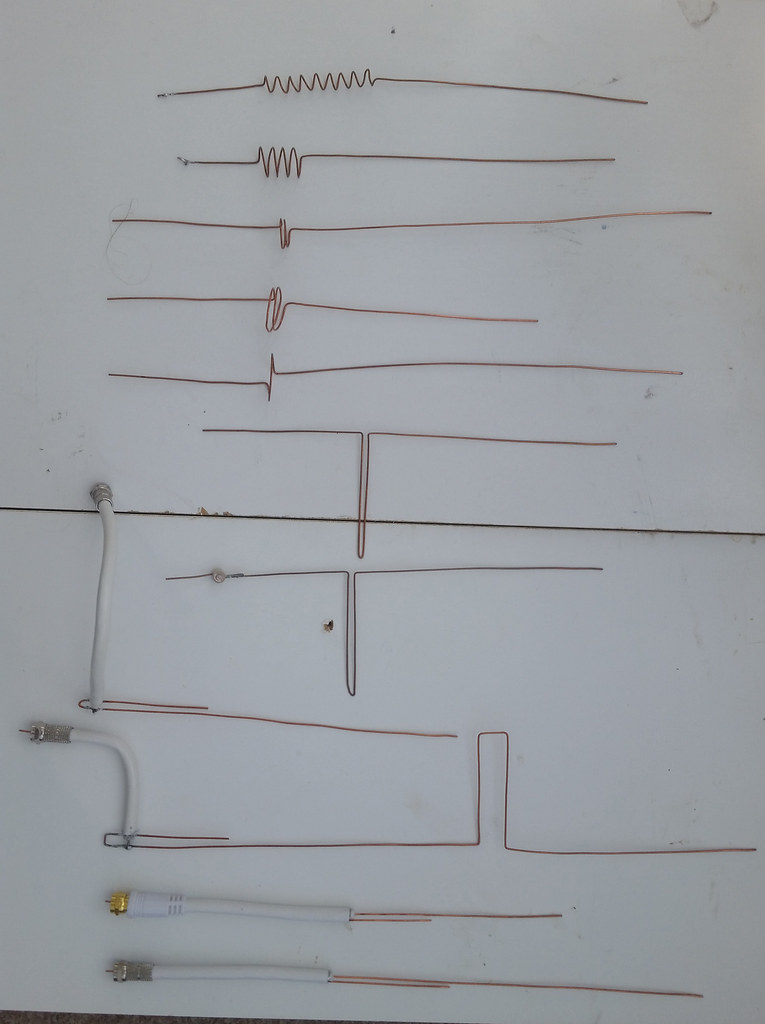 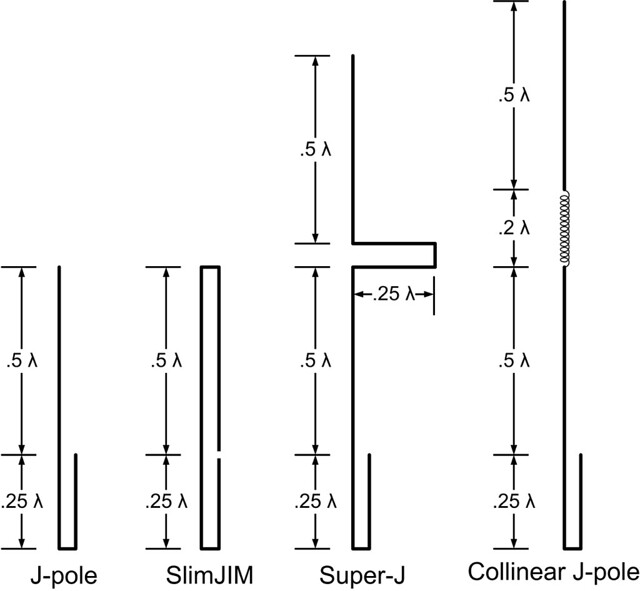 Make a Spider or Cantenna, and use it as Benchmark/Reference antenna. Comparison of performance with the Benchmark antenna will give you real picture of how your other antennas perform.

Ok, I will do the simulation of your Collinear J-Pole design and post results. By the way I am not NEC guru, just a hobbyist.

My current benchmarks are a ground plane (aka Spider) and a Slim Jim. The Slim Jim from this post200914.html has a much better range and was really easy to build and match. Actually I didnt match, just soldered the feed to the calculated point and it worked fine. Thus my adventures with the J-Pole Collinear

My current benchmarks are a ground plane (aka Spider) and a Slim Jim. The Slim Jim has a much better range and was really easy to build and match. …

Thanks for input. I never built & tried Slim Jim, only J-Pole and Super J-Pole, both performed less than Cantenna. I will now make a Slim Jim and compare it with Spider & Cantenna.

Actually I didnt match, just soldered the feed to the calculated point and it worked fine.

Can you please give the link to the J-Pole calculator you used?

Yes, I agree with triggers about Franklin. It was my second antenna after 1/4 dipole. It had 4 vertical elements, 2 hairpins (stubs) for phasing. Its photo is here:

Shortly afterwards, I added a stub in the middle for impedance matching, and cable tap-off, similar to j-pole stub. It performed good and I used it for a long time, before switching to Cantenna. Later I added one more Pi with FA 26" antenna. The Franklin antenna’s diagram is here:

Some interesting findings from the latest tests.

Made a Collinear J-Pole (3 elements), tested on bench and it performed fairly better than a Slim Jim (my reference now). Both handheld at my window, while the Slim Jim tracked 5 aircrafts, the Co J-Pole tracked 12. Nice. Time to put it on the roof. Result: 2 to 3 aircrafts tracked (the Slim Jim on the same place/cable was tracking 17~20).

The difference between the setups are

Replaced the dongle + cable on the roof by my testing ones and the result was great, good range, great number of messages, no shadow areas. By miles the best antenna I built ever.

Looks like the Pro Stick is very strict on the impedance and matching a homemade antenna is very difficult. Now I’ll leave the J-Pole running for a couple of days and then will bring my RGC213 back to life for comparison.

CONGRATULATIONS for the progress!

Now in responce to your request, here is NEC Simulation of your Collinear J-Pole 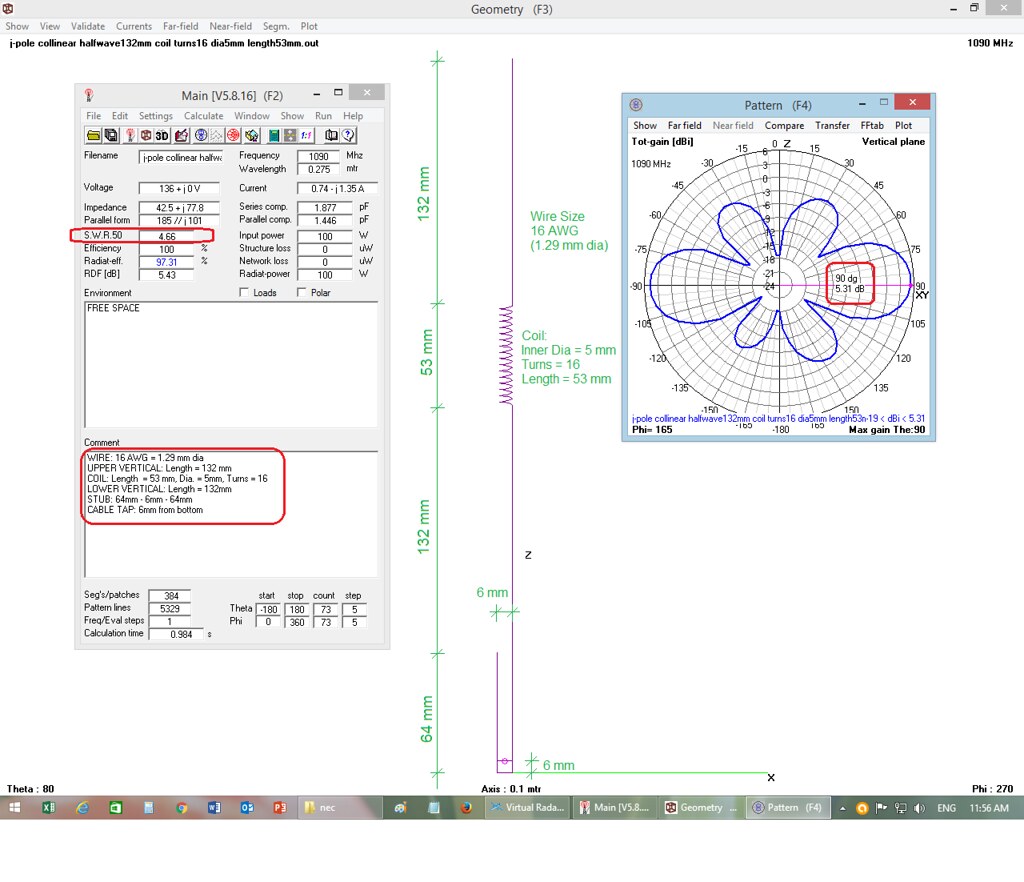 Thanks for the simulation.

Could you please try different feed points to try to improve the SWR?

Thanks for the simulation.

Could you please try different feed points to try to improve the SWR?

Ok, I will run the simulation again to find best feed point, but dont depend too much on software simulations. The results have errors around 5% to 15%, enough to knock down a collinear. These can at best be taken as crude guide. The trial & error method to adjust feed point gives better results. Try 6mm +/- in steps of 2 mm.

But dont get disappointed, the simulation results cannot be blindly relied upon. Try to adjust feed point manually in steps of 2 or 3 mm. 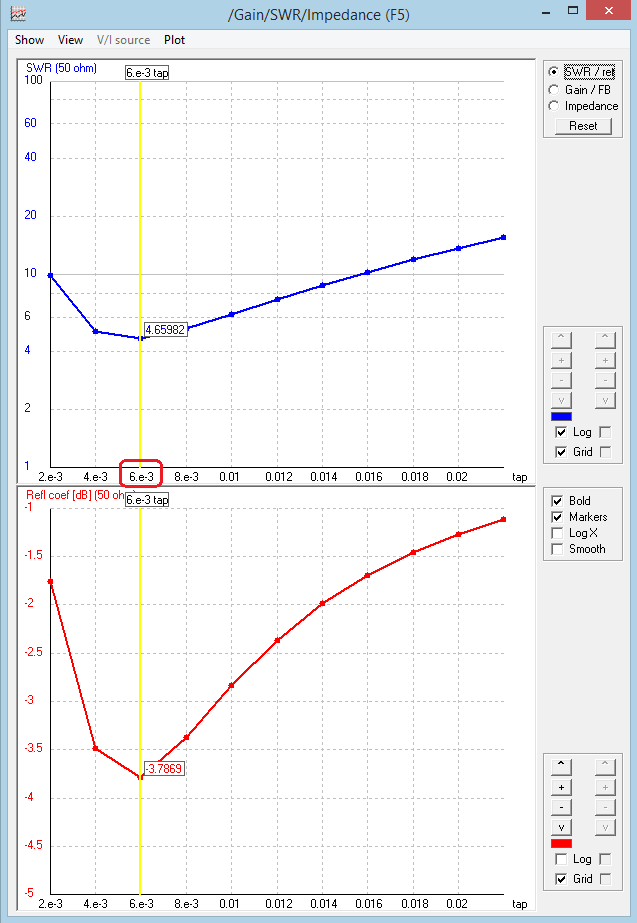 Would you mind sharing the .NEC? I’m going to spend some more time on this antenna.

Would you mind sharing the .NEC? I’m going to spend some more time on this antenna.

The .nec file is on my Desktop, and I am not at home now, replying from my phone. When at home, I will upload it to dropbox and post a link.